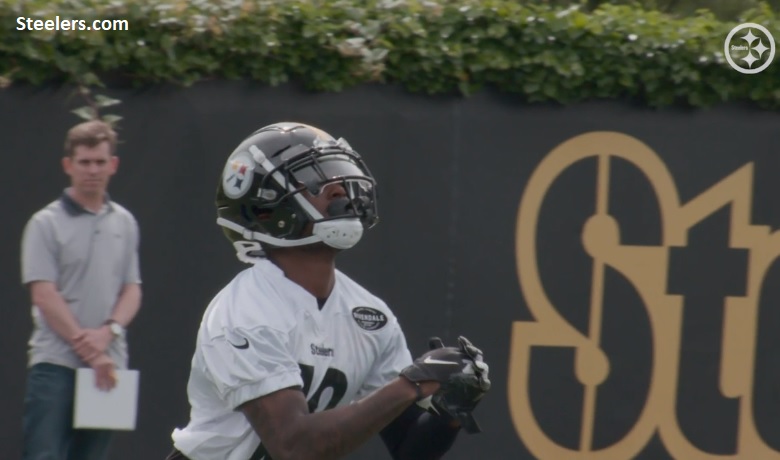 In addition to catching 137 total passes for 2,276 yards and 24 touchdowns during his college career at Toledo, Pittsburgh Steelers rookie wide receiver Diontae Johnson, the team’s first of two third-round draft picks this year, also returned 17 punts for 343 yards and two touchdowns, and 79 kickoffs for 1,849 yards and two touchdowns. Because of his college experience as a returner, Steelers special teams coordinator Danny Smith was asked Tuesday at the start of the team’s annual mandatory minicamp if Johnson excites him as a potential returner in Pittsburgh.

“Yes, he does,” Smith said. “You know, I studied him a lot. I liked him a lot. I put together tape on him. We discussed him in the draft in that fashion. I went over to Toledo to visit with him and meet him. I spent a lot of time with him. He’s a good player. He’s a real good player. And we’ll see, you know, how he handles all this, you know, at the next level. But he’s a very good player.”

With Johnson having far more experience at the college level returning kickoffs than he did punts, he might get a long look from Smith in that particular area of special teams during training camp and the preseason. Last season for the Steelers, fellow wide receiver Ryan Switzer handled nearly all of the punt and kickoff returns. Switzer returned 30 punts for 252 yards with a long of 23 yards and 30 kickoffs for 607 yards with a long of 35 yards. While the Steelers 8.1 team average on punt returns ranked in the middle of the NFL last season, their 19.3 kickoff return average ranked 31st overall.

The Steelers have let rookie wide receivers return kickoffs in recent years as JuJu Smith-Schuster had 9 of them for 240 yards and a touchdown during his 2017 season. Even if Johnson isn’t allowed to initially return kickoffs at the start of his rookie 2019 season, maybe he’ll get a chance to as the season progresses should Switzer, or someone else, fail to impress in the first few games.

Regardless of how things play out later this summer, the Steelers need to do a better job in 2019 when it comes to returning kickoffs as a 19.3 average just isn’t close to being good enough.

Below are Johnson’s two returns from last season at Toledo.