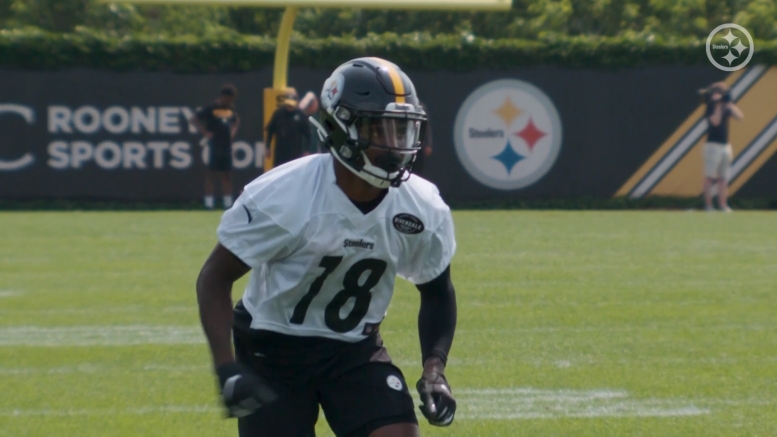 OTAs have been going awfully well so far for the Steelers. There really haven’t been any negative reports coming out regarding anybody’s on-field performance, and injuries have been pretty minor. Sean Davis and Stephon Tuitt were sidelined for a while, and Diontae Johnson was limited, but they all appear to be back now in time for full attendance at minicamp next week.

As for Johnson, he dealt with a hamstring injury since at least rookie minicamp, and perhaps before that, during which he was limited to individual drills as a precaution. That appears to have largely been kept status quo with a few team reps mixed in here and there through the first weeks of OTAs, but it has been said that he has been a full participant for the past week’s sessions, which is why I’m calling his stock up.

While he did miss some valuable reps over the past few weeks, he has still been able to be on the field doing some things the whole time, and others like Ben Roethlisberger have been going out of their way to try to keep him up to speed.

But now he appears ready as the Steelers gear up for minicamp, which is good news. Not that there were ever any indications that this would be a prolonged issue—certainly nothing that should have been anticipated to affect his participation in training camp, but as is needless to say, it’s always better to be healthy.

And when he has been on the field, Johnson has garnered positive reviews so far, with many of his teammates noting his speed. He may not have posted a great time in the 40-yard dash, but that was never an indication of the type of pace at which he can play in a football setting.

For the moment, there is no reason to believe that he should not be in position to compete for a significant role in the Steelers’ offense as a rookie. If he really excels, he could even end up starting. But he still has a long way to go for that.