There has been a changing of the guard in the Pittsburgh Steelers’ locker room over the course of the last few months. When head coach Mike Tomlin enters his locker room, he will notice a barrage of changes. The big changes are very noticeable with the departures of Antonio Brown and Le’Veon Bell, though Bell has been absent for well over a year. The smaller changes are a lot more subtle, the injection of athleticism into the defense with the arrival of rookie linebacker Devin Bush and the youth movement that has taken over the receiver room.

Here are the Steelers’ projected top six receivers and what their age will be by the end of this calendar year. 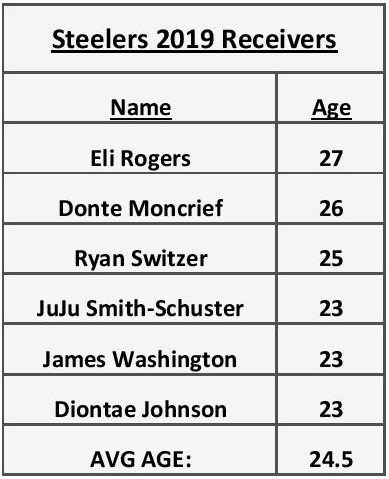 With the departures of Brown and veteran receiver Darrius Heyward-Bey, there is a big opening for a veteran presence in the receiving room. The oldest wide receiver in the room is Eli Rogers, who will be 27 years old by year’s end, though he can hardly be counted as the veteran leader of the group. While Donte Moncrief could fill that role, it seems that JuJu Smith-Schuster, one of the youngest members of the group is chomping at the bit to be a vocal leader and representative of the group. With the oldest wide receiver in the room being just 27 years of age and the average age of the group being 24.5 years old, the 2019 Steelers will feature the youngest receiving group of Tomlin’s coaching career.

Listed below is the average age and oldest member of the Steelers wide receiver room throughout Tomlin’s years as head coach. The six projected wide receivers listed above were used for 2019 and every wide receiver who has recorded at least one reception for the team is used for years prior. 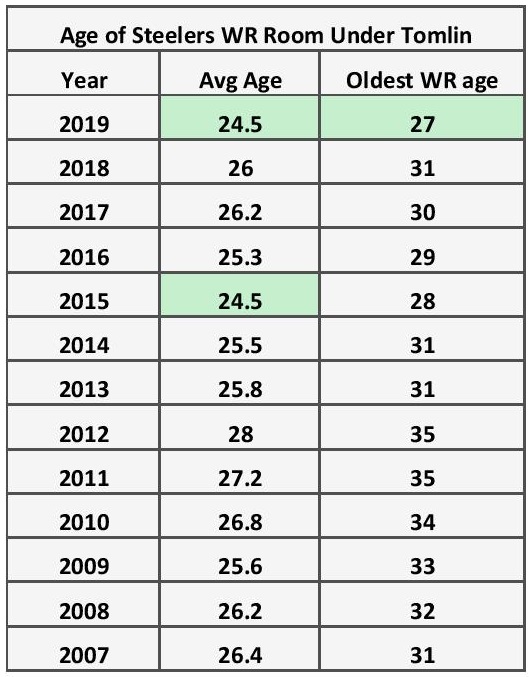 Under Tomlin, the Steelers have never had the oldest member of their receiving group be 27 years old or younger. In ten of Tomlin’s 13 years as head coach, the team has had at least one member of the receiving group be 30 years old or older, this year they will have none. The average age of this year’s projected top six receivers is just 24.5 years of age, that would be tied for the lowest in Tomlin’s tenure along with 2015. Though, that 2015 year includes the age of former Steelers’ receiver Tyler Murphy, who caught just one reception and also served as the Steelers’ backup quarterback for a short span. If Murphy is omitted and only players who served strictly as receivers are used, the 2015 average age jumps to 25 years old, giving 2019 the sole honor of the youngest group.

The absence of a true ‘veteran presence’ would likely make many teams uneasy but not the Steelers. The unit is a tight knit group led by the soon to be 23-year old Smith-Schuster and while it may seem unorthodox to be without a 30-year-old veteran and led by a receiver with just two years of service time, Smith-Schuster is not your typical young receiver. The 2018 Team MVP, Smith-Schuster demonstrates maturity beyond his years when fielding questions and demonstrates talent beyond his years as well.

When it comes to their wide receivers, the Steelers are not out to abolish the traditional veteran movement, instead the team is looking to show the benefits of unity, a constant theme shown by various receivers and members of the offense this offseason.