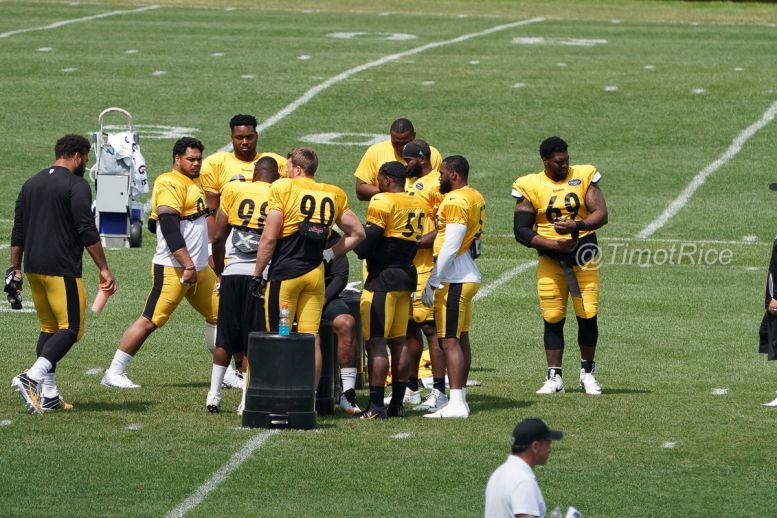 My first crack at predicting the 2019 Pittsburgh Steelers 53 man roster. Obviously plenty will change and we’ll update this throughout training camp. But a good conversation starter for this Monday. Added a practice squad at the end just for kicks. Let me know what you’d change in the comments below.

Analysis: Probably the easiest position group to evaluate after last year’s big debate between Landry Jones and Dobbs. As long as everyone remains healthy, these three are locked in. I’ll see you in the 4th preseason game, Brogan Roback.

Analysis: Another group that seems pretty settled. Snell is a near-lock to make the team, buoyed by the fact there aren’t many names likely to push him.

Analysis: The baddest dude on the team, Nix’s spot is safe.

Analysis: The first group that has some tough decisions to make. Leaving Eli Rogers off the list. He may make the roster but he feels redundant at this point. Slot options? You have that with JuJu, Moncrief, Switzer, and Johnson. Punt returns? Switzer and Johnson have that covered, too. Switzer is a bit more of a threat in space who can do kicks and punts and will hopefully be able to make a bigger jump having his first full offseason and camp with the Steelers. So he gets the nod here. Watch out for Trey Griffey and Tevin Jones, too. Could use a coverage guy at the end of his unit. None of the names on this list are likely to do it.

Analysis: I agree with Dave Bryan the odds are relatively high a new face is added to the roster during camp, one of Kevin Colbert’s annual August trades, or an addition after cutdowns. That could place Gentry on the practice squad but with my roster construction, it’s possible they keep four tight ends, too.

Watch out for Buffalo’s Jason Croom. But for now, we’ll keep these three, and leave that extra spot open, because there’s no argument to be made for any other name on the 90.

Analysis: First seven names here are locks. Adding a pair of new names to the bottom of the list in Johnson and Morris. Gotta hope at least one UDFA makes the team, right? He has size, athleticism, and tackle/guard versatility. Morris gives them a solid option at center. Don’t forget about RJ Prince either. Cutting Jerald Hawkins just because his injury history is so messy. But when healthy, he’s looked good.

Analysis: Hard to see much movement here especially with their unwavering support of Big Dan. Now it’s just a question of if he or Buggs gets the final hat on gameday. My hope is it goes to Buggs. But a relatively easy group to project right now.

Analysis: Like I wrote last week, really tough to make a case for cutting Tyler Matakevich. The other three are locks. Just a matter of how they figure out the snap count.

Analysis: First four are relatively easy choices, I guess Adeniyi could be considered on the bubble, but if his play resembles what he showed as a rookie, he’s making it. Came down to Sutton Smith vs Ulysees Gilbert III, a coin toss right now honestly. Went with Smith because his motor is a touch better and his pass rush background makes him a more effective player to run down kicks and punts.

Analysis: Going with the safe five and no one more. Brian Allen is off scholarship and Artie Burns no longer has a role. Keep an eye on Herb Waters who, like Layne, was a receiver turned cornerback before the Steelers signed him last October.

Analysis: I’m not ready to push Danger off the roster yet. Give me that excellent special teamer who, oh yeah, is probably the backup free safety. If not him, then who? Tocho is my flier who may make a couple plays in coverage and hopefully shows well on special teams. Listed as a corner but I still think he’s playing safety once camp opens.

Analysis: Not going to make any special teams substitutions for kicker or punter. Gotta see the rookies in action. Rooting for Boz to turn things around.

Analysis: Berry’s job isn’t safe but safer than you think. Ian Berryman had an excellent career at Western Carolina but there’s a third option too, going out-of-house at the end of the preseason, as the team has done before. Zoltan Mesko 2.0.

Analysis: The safest of the three specialists. Vance McDonald will be the backup long snapper during the regular season, if you’re wondering. He snapped at Rice.

Analysis: Steelers get to keep 11 with CSW still exempt from the roster. All the draft picks make either the 53 or practice squad. Like Myres for his special teams value and Locke for his hard-hitting ability. And a kicker? Yup. With the extra spots, the team can take a flier, and I think having that daily competition will focus Chris Boswell. Plus, it actually might help having another kicker, even a rookie, to talk things through with. Instead of just a coach.