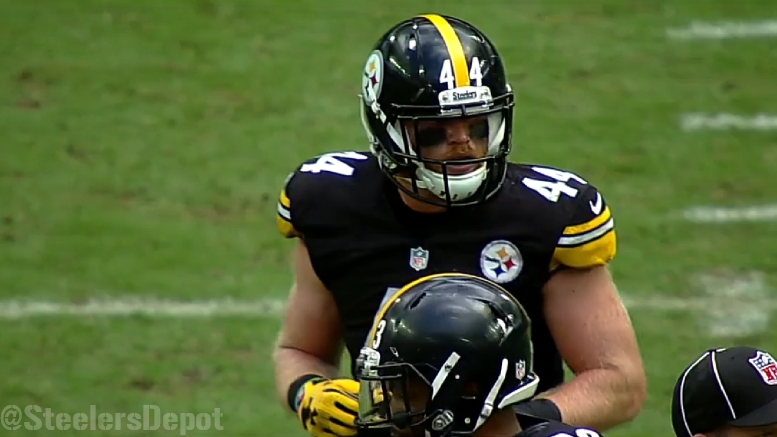 I know the Pittsburgh Steelers brought in three new toys for fans to get excited about: Devin Bush, Sutton Smith, and Ulysees Gilbert III. It’s fun to think about their potential, their role, how they’ll help the Steelers win. And sure, hopefully they will. For Kevin Colbert’s sake, Bush better. And I think he will.

At the same time, it’s easy to be anxious about running the current players out of the room. There’s already been tons of turnover the last nine months in that inside linebacker room. L.J. Fort went to Philadelphia. Matthew Thomas left as quickly as he came. And Jon Bostic was axed hours after the draft. Since, I’ve gotten tons of comments that Tyler Matakevich should be the next to go. Out with the old, in with the new.

Let me quote Lee Corso here. Not so fast, my friend.

I mean, sure, release Tyler Matakevich. That is, assuming you want to make the Steelers special teams worse. Maybe then you’ll have a good case to can Danny Smith.

Far as I’m concerned? Matakevich has a roster spot until someone proves they can do his job better.

And let’s make his role clear. Should this dude sniff the field defensively? No way. His style is the antithesis of the evolution of the game. Speed. Versatility. Playing outside the tackle box. There’s a reason why Colbert grabbed every linebacker who even came close to a 4.5 40. But that’s not Dirty Red’s role and well all know it. Instead, he’s an elite – yeah, I said it – special teamer. And no rookie is going to replace him without proving a similar caliber of play.

Since Matakevich was drafted in 2016, no Steeler has more special teams tackles than him. Here’s the top five and look, it ain’t even close.

Combined, Nix and Fort have just one more tackle than Matakevich has. But ok, you say, that’s just the Steelers. Play anyone enough and they’re bound to luck themselves into tackles. Let’s look at the top five from the entire league.

Three of those names, Thomas, Trawick, and Bethel have all made the Pro Bowl. Frankly, Matakevich has deserved a bid there.

Is he fast? No. Does that matter for special teams? Nope.

Think about the great special teams players of this century. Sean Morey. Clint Kriedwalt. Patrick Bailey. Roosevelt Nix. Vince Williams. Chidi “You Better Believe I’m Including Him In Every Article I Can” Iwuoma. Any of those dude burners? Nah. But you better believe they impacted the return game.

Practically, the numbers work too. Here’s how the linebacker group could look by Week One:

That’s ten total, yes a little heavy, but only by one. All it takes is for one of those 6th rounders, Smith or Gilbert, to land on the practice squad and boom, you’re at the usual nine. Isaiah Buggs is probably going to make the team but it’s hard to envision all three 6th round selections making the roster out of the gate. This isn’t a rebuilding team with loads of roster spots up for grabs.

Cut him and your team is instantly worse. No debate about it. He should – and likely will – remain a Steeler in 2019.