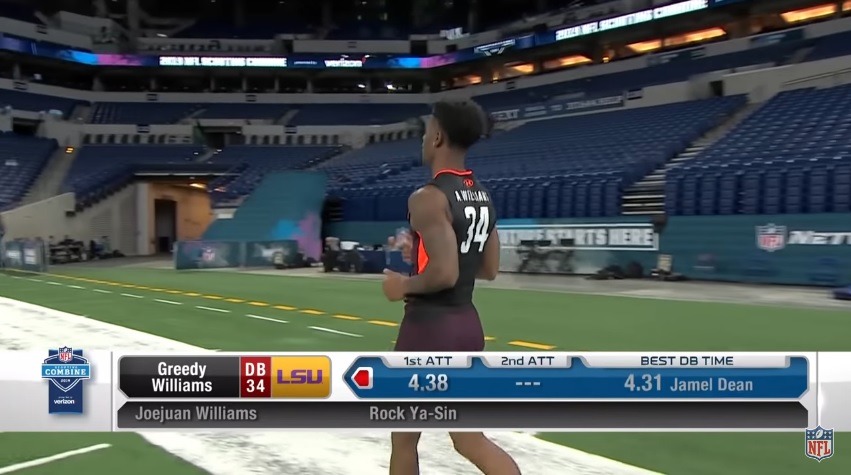 Even though the Cleveland Browns did not have themselves a first-round pick this year—they traded it to the New York Giants along with a third-rounder and safety Jabrill Peppers in exchange for wide receiver Odell Beckham, Jr.—they still believe that they were able to land a first-round player with their 17th-overall pick in the second round.

In doing so they added a player that Beckham himself was pretty happy with as a fellow alumnus of LSU, cornerback Greedy Williams. Considered by many to be the top coverage player in the draft, he ended up going behind several other players at his position due to concerns about his lack of physicality and potential maturity issues.

Williams knew how to make an immediate impact, however. He predicted a Super Bowl appearance for the Browns, who have not posted a winning record in over a decade and were last in the postseason in 2003.

While I’m sure the sentiment was appreciated, the team advised him not to do that again. Less talking, more working. Head Coach Freddie Kitchens said of the situation, “we’re not in the prediction business”.

“John Dorsey, he kind of just told me, ‘less talk, more work’”, Williams told Aditi Kinkhabwala. “I took that bait. That’s just how I was feeling that day, you know, knowing what we got. But it all boils down to how hard we work for it…I think we’re gonna be ready, and I think we should be one of the top teams in the NFL this year”.

After making a Super Bowl prediction, @Greedy is ready to prove his worth for the @Browns 👇

Kinkhabwala baited him into another prediction, one that was much tamer, simply saying that he is here to put in extra work, get the trust of his teammates, and be the best teammate he could be. He even declined, when asked, to make any predictions about facing JuJu Smith-Schuster and A.J. Green, the top two wide receivers in the division he’ll be facing.

Williams has the potential to be a day-one starter in the Browns’ secondary alongside 2018 fourth-overall pick Denzel Ward, who went to the Pro Bowl during his rookie season a year ago. If there is one area of the roster where Cleveland is thin, it is probably still in the secondary.

While the rookie’s boldness didn’t entirely sit well with his coaches, knowing that it’s a bad look if you don’t actually make it there, the reality is that the Browns have not exactly been an unpopular pick. They are among the top 10 teams in Las Vegas in terms of the odds of winning the Super Bowl, higher than the Pittsburgh Steelers.