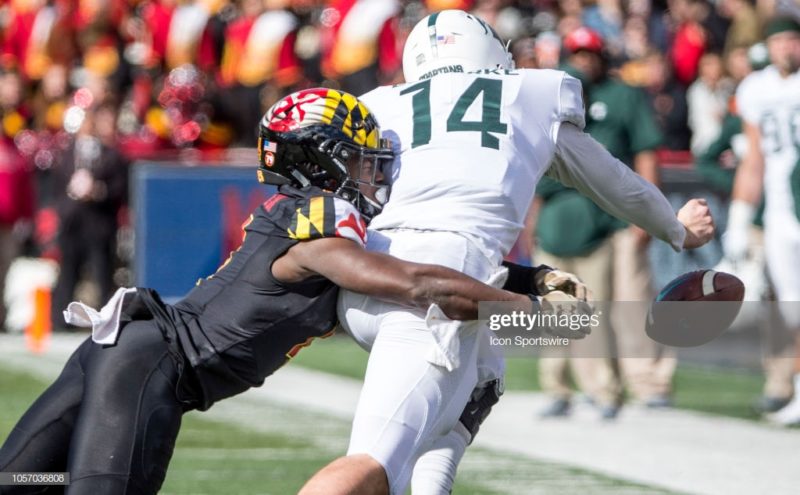 Although the Pittsburgh Steelers seem to have their sights set on Maryland safety Darnell Savage, if they want to draft him, they’re likely to face a difficult decision. Either take him at #20 or risk on missing out on him entirely.

In a conference call highlighting next week’s draft, NFL Network’s Daniel Jeremiah said teams around the league “love” Savage and predicted him to be a Top 40 player with a chance to go in the first round.

“Savage is, I’m glad you brought him up, because there’s no player that’s got more steam and momentum right now in this draft than Darnell Savage,” Jeremiah said. “Teams love him, love him to the point where I would not be surprised if he found his way into the first round. The only thing he’s lacking is just kind of ideal size, a little bit undersized, but he ran 4.3, he plays to that 4.3.”

Savage had one of the top Combine workouts of any safety. In addition to that 4.36, he jumped 39.5 inches in the vertical and 10’6″ in the broad. His versatility could allow him to play all over the field, a must for virtually any safety in the league. There’s production to back up that athleticism too, eight interceptions at Maryland, and an aggressive play style with power to finish his tackles.

“I would say absolutely he’s a top-40 pick, and I think he’s got a real chance to sneak into the first round when it’s all said and done. Teams love Darnell Savage.”

Could the Steelers be one of those sneaky teams at #20? It may seem like a reach but probably less so than Arite Burns or Terrell Edmunds were viewed. The high-end safeties the organization have drafted have been “freaks.” Edmunds, of course, tested very well, Sean Davis has comparable numbers and Shamarko Thomas, who the team held in such high regard they traded up for, had an awesome Combine workout.

While Kevin Colbert nor Mike Tomlin attended Maryland’s Pro Day (Colbert was at Texas the same day), the fact he was brought in for a pre-draft visit puts him in play for #20. At least in theory. Add in he’s a top SPARQ player, productive, an underclassmen, and from the Power 5, and Savage checks plenty of boxes, whether you view him as a legitimate first rounder or not. It’s also possible the team may trade up from 52 to get him but we’re speculating even more at this point.

The dime linebacker spot is still very much unknown and an area the Steelers must address. Marcus Allen could play that spot, as he did against the Los Angeles Chargers in 2018, but he shouldn’t be handed the job and ideally, you’re looking for an upgrade.