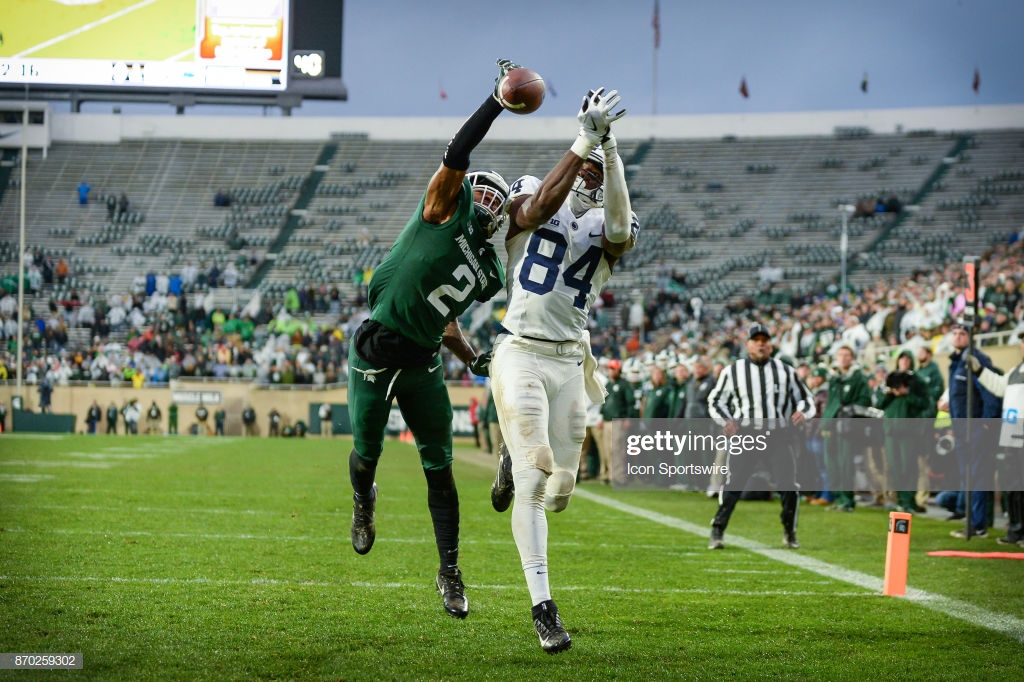 The Pittsburgh Steelers 2019 draft class includes a few players who originally entered the colleges they played for at positions different from the ones they’ll enter the NFL at. Those two players, are cornerback Justin Layne and tight end Zach Gentry and they were recruited by Michigan State and Michigan, respectively, to play wide receiver and quarterback, respectively. During a Monday interview on SiriusXM NFL Radio, Steelers general manager Kevin Colbert talked about the upside both Gentry and Layne have upon entering the NFL due to both only playing the positions they mainly played in college a very brief time. We’ve already passed along what all Colbert had to say Monday about Gentry’s upside and today we’ll focus on all that he had to say about Layne.

Colbert’s Monday comments about Layne started and stemmed from a statement made by show co-host Jim Miler in which he indicated that the Michigan State product basically had to follow the same path to the NFL as current New York Giants cornerback Tony Lippett, also Spartan alumni, had to travel a few tears ago. In case you forgot, Lippett, who was drafted by the Miami Dolphins in the fifth round of the 2015 NFL Draft out of Michigan State, originally started his college career as a wide receiver before quickly being shifted to cornerback and then back to wide receiver again. As a matter of fact, Lippett led the Big Ten in receiving yards (1,198) and ranked second in touchdown catches (11) while compiling six 100-yard receiving games in his senior season at Michigan State.

“We think he’s still on the rise, you know, only having been at a corner really for two years as a starter,” Colbert said of Layne. “And he does have length, he does have speed, he understands what receivers are doing because like you said, in reference to Lippett, he’s played that position. So sometimes when a corner’s reading a route, he knows what the route is and what the receiver’s thinking. And you know, Michigan State’s still used him some in a few packages running a couple of deep routes and comebacks and things of that nature. So he knows how to play, but he has ball skills as well. So, we don’t think we’ve seen the best of him, quite honestly. We think he is still on the rise and that’s exciting because he certainly has the length and the speed and the attitude.”

The Lippett and Layne comparison is an interesting one to make and especially when you consider both had similar paths to the NFL. It’s also interesting to compare Lippett’s and Layne’s combine results. As you can see below, Layne posted better combine numbers this year than Lippett did back in 2015. By the way, Lippett’s 2015 pSPARQ score was 105.7 while Layne’s was 128.9 this year. Layne also enters the NFL at 21 years of age while Lippett was just a few months shy of his 23rd birthday when he was drafted in 2015 by the Dolphins.

Despite not playing as much at cornerback during his college career at Michigan State than Layne did during his, Lippett still progressed quickly at the NFL level as a cornerback. After primarily playing on special teams during his 2015 rookie season with the Dolphins, Lippett became a starting cornerback for Miami in his second season and went on to finish fourth on the team with 67 tackles, second on the team with ten passes defensed, and leading the team with four interceptions.

After a solid second season in the NFL with the Dolphins, Lippett’s third season was spent on Miami’s Reserve/Injured list due to a torn Achilles he had suffered during training camp in 2017. After sitting out a year, the Dolphins ultimately released Lippett just ahead of the start of the 2018 regular season and he the Michigan State product later landed with the New York Giants. He played just 3 games with them this past season, however, and it will now be interesting to see if he’s able to make their 53-man roster this year.

“I really like him and his potential,” Austin said of Layne. “When I first saw him, I thought he was really quick bodied, long arms, good ball skills, and very competitive. I think that’s one thing that sticks out with him when you watch him, he’s competitive. He’s not afraid to throw it up in there. He’ll tackle, he’ll compete at the point of attack for a ball. So he’s got a lot of good things to work with.”

So, what is the flaw with a guy that’s 6-foot-2 with the kind of speed that Layne has? Austin isn’t sure.

“I’m not sure what the flaw is,” Austin said. “There are a lot of good football players that probably got picked before him. I think it’s just a matter of flavor. And I think when we saw him sitting where he was, I’m very excited to have him. I didn’t think he’d be around this long.”

Speaking of long, that exactly how Steelers defensive coordinator Keith Butler started off describing Layne when he first talked about the team’s latest drafted cornerback on Saturday.

If things go as they’re currently likely planned, Layne won’t have to play much on the defensive side of the football during his rookie season. The hope probably is that he can work on becoming a more-rounded, more experienced cornerback during his rookie season during practices and perhaps push for a starting job ahead of his second season. The Steelers obviously haven’t done a great job when it comes to drafting and developing cornerbacks since Colbert arrived in Pittsburgh in 2000 so perhaps them now drafting one with a college wide receiver background will help change that. After all, Colbert has a much better track record when it comes to drafting and developing wide receivers that come out of the first three rounds.