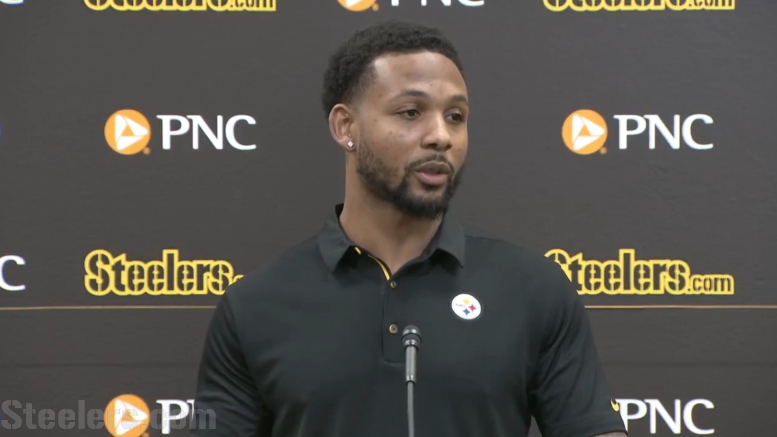 He just spoke to the media within the hour for the first time since signing, holding a brief press conference to field a series of questions regarding his time on the field with the Chiefs, where he prefers to line up, who he knows on the Steelers, etc. At the end of the press conference, though, he was asked whether or not he reached out to other players regarding Pittsburgh’s ‘drama’ over the course of the past couple of seasons.

“I didn’t”, he said. “I know guys that have told me great things about this organization and Coach Tomlin and how the vibe is around here. It’s very chill. Guys just come to work and it’s like a family. I’ve heard great things already. I don’t really pay attention to all the crap that’s in the media. It’s not true”.

Many seemed to fear that free agents would be reluctant to sign with the Steelers because of the negative public perception that has festered over that time, particularly in the aftermath of the dissolution of their relationship with Antonio Brown.

Defensive captain Cameron Heyward even went so far as to say during an interview early in the offseason that any free agent who was concerned about coming into the locker room should talk to him about it directly.

Brown did his best to paint the organization in a bad light while at the same time trying to make it seem as though there were no hard feelings, and he succeeded well enough to force the Steelers to trade him for relatively meager compensation given his talents.

So far this offseason, the team has added two outside free agents, both made official today, in Nelson and wide receiver Donte Moncrief, who signed a two-year contract, the details of which have not yet been disclosed.

As usual, the front office has been primarily invested in re-signing and retaining their own, bringing back or giving extensions to Maurkice Pouncey, Ramon Foster, Jordan Berry, Eli Rogers, Anthony Chickillo, and Daniel McCullers, in addition to a number of restricted and exclusive rights free agents.

The team has already lost tight end Jesse James, running back Le’Veon Bell, and inside linebacker L.J. Fort in free agency. Among those who remain free agents for them are Coty Sensabaugh, Justin Hunter, Stevan Ridley, L.T. Walton, Nat Berhe, and Justin Hunter.