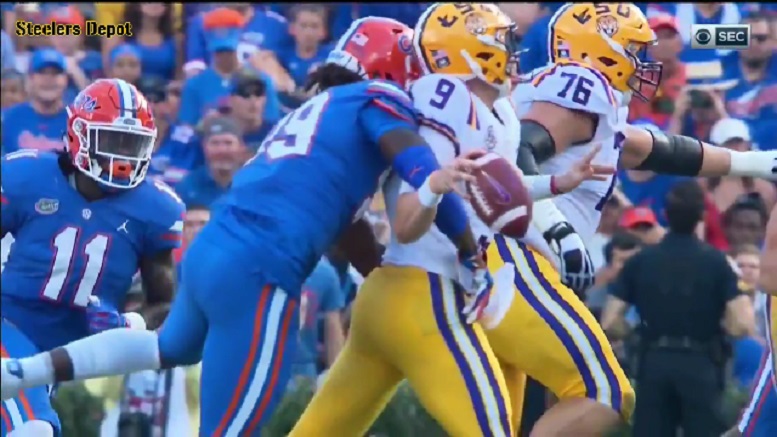 Florida edge-rusher Jachai Polite is considered by many to be a first-round draft prospect this year and the underclassman announced on Saturday that he has a formal meeting set up with the Pittsburgh Steelers while in Indianapolis for the annual scouting combine, according to Aaron Wilson of the Houston Chronicle.

The Steelers could certainly stand to use another edge-rusher in this year’s draft as they don’t currently have any experienced depth under contract for 2019 behind starting outside linebackers T.J. Watt and Bud Dupree, both of whom are former first-round draft picks.

Polite is considered by many to be a top-40 player in this year’s draft class and many have him projected to be selected somewhere in the second half of the first round.

Polite and the rest of this year’s edge-rusher and linebacker class will go through the paces at the combine on Sunday.

Jachai Polite @RetireMoms details how the interviews have gone and his style as a player.#NFLCombine pic.twitter.com/DOvCtOjhP9

Jachai Polite would be an ideal trade-down target for #Raiders. Here he is on not being the ideal size: #NFLCombine pic.twitter.com/Dx4kRJ8upr

Jachai Polite told me leverage has been a key to his effectiveness as an edge defender despite being 6-2. It gives him a chip. Said he had a formal meeting with thev#Titans. pic.twitter.com/GhmB3tTAtc