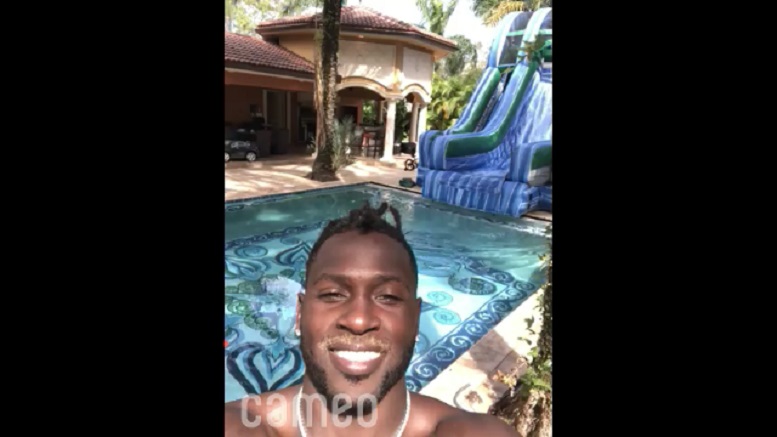 Brown is apparently charging $500 per personalized video greeting and it looks like he’s already had a few takers even at that lofty price. According to Brown’s profile on Cameo, the wide receiver “typically responds within 8 hours.” You can see an example of one of his videos below, courtesy of a tweet by Josh Rowntree of KDKA-AM. It’s quite entertaining.

Antonio Brown has joined the website Cameo and is asking for $500 per video he films for you.

Below is an example they're using. #Steelers

"I hear it's your second anniversary…….wedding…" has me dying. pic.twitter.com/sAwb3syDPx

One would wonder why someone such as Brown would even waste his time with something such as this. After all, the wide receiver recently stated in a sit-down interview with Jeff Darlington of ESPN that he is incredibly secure from a financial standpoint at this point in his life.

“The Steelers probably gave me five contracts, including extensions, almost a $100 million and change,” Brown told Darlington in the interview. “I’m $30 million up cash, like, what do you want to tell me?”

I guess an easy $500 is an easy $500, right? If people are willing to pay that kind of money for a minute-long video, or however long the rules stipulate, why not accept it, right?

It would be interesting to see some fans pool some money together to get Brown to record a very creative greeting. As one follower suggested to me on Twitter, perhaps a video of Brown congratulating fellow Steelers wide receiver JuJu Smith-Schuster for winning the team MVP award would be funny.

Have him congratulate JuJu on Team MVP. pic.twitter.com/wLnDs5NAgU

With the splash this topic is now making on social media Monday afternoon, I wonder if Brown will quickly remove his Cameo profile. In the meantime, however, I’m interested to hear suggestions from those of you reading this post as to what would be a funny message to order from Brown. I look forward to reading the comments below.