Shot #1 – Former NFL agent Joel Corry of CBS Sports recently wrote a very informative article on Steelers running back Le’Veon Bell and what likely lies ahead for him during free agency now that the team has decided against placing the transition tag on him. Corry covers the likely landing sports for Bell in addition to what his market value is likely to be.

Shot #2 – Steelers wide receiver Antonio Brown will be on an upcoming episode of “The Shop,” the HBO show which is executive produced by LeBron James and Maverick Carter and features the pair talking about all sorts of topics with other high-profile individuals. That upcoming episode, which is scheduled to air Friday, March 1 at 10:30 PM on HBO, will not only include Brown, but New Orleans Pelicans forward Anthony Davis in addition to rappers Meek Mill and 2 Chainz, Oscar and Grammy winner Jamie Foxx, and comedian Jerrod Carmichael. It will be interesting to see how much Brown has to say about what all has transpired since Week 17 of the 2018 NFL regular season which included him going AWOL on the team.

Pull up a chair, #TheShopHBO is back.

Get a fresh cut Friday, March 1 at 10:30PM. pic.twitter.com/xGw5xbTQkq

Shot 3 – Speaking of Bell and Brown, MyBookie.ag now has updated futures odds on where the two players will ultimately wind up playing in 2019 and you can see them below. The online sportsbook currently has the Indianapolis Colts as the favorites to land Brown this offseason at 300/1. The Colts and the Oakland Raiders, on the other hand, are currently listed as the joint favorites to land Bell this offseason at 400/1. 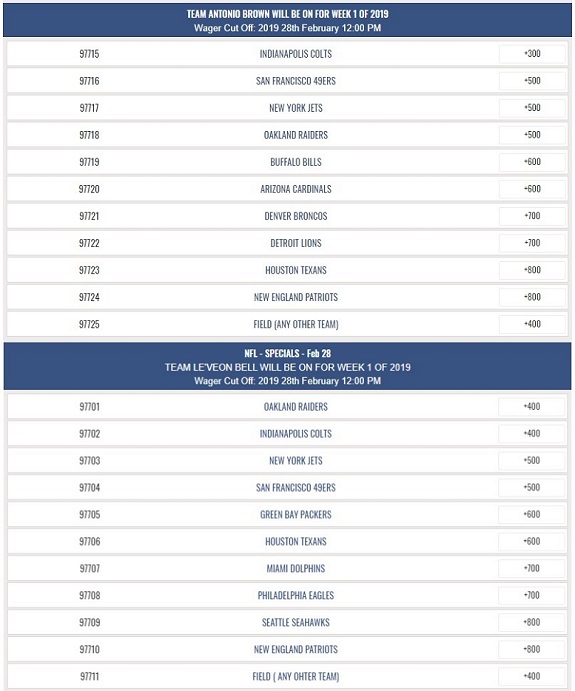 Shot #4 – Steelers wide receiver JuJu Smith-Schuster was recently included in the the most recent Youtube episode of ‘The Danny Duncan Show.’ At one point during the show, Smith-Schuster and Duncan play some football inside a mall. I must warn everyone, however, that the video below does include some language that’s not safe for young children or work environments. Consider yourself warned.

Shot #5 – Its been 15 years since Steelers quarterback Ben Roethlisberger participated in the 2004 NFL Combine and below is short throwback video from steelers.com of him going through the paces in Indianapolis.

Shot #6 – Obviously, the 2019 NFL Scouting Combine will get underway in Indianapolis next week and below is the coach and general manager schedule for media availability for Wednesday and Thursday. Steelers general manager Kevin Colbert is currently scheduled to hold his annual combine press conference on Wednesday at 11:15 a.m.


Shot #7 – Finally, Colbert made a lot of waves this past week with his support of Roethlisberger being the Steelers unquestioned leader. Since then, several major media talking heads have chimed in with their individual thoughts on what Colbert had to say about the franchise quarterback and that included Rich Eisen of the NFL Network, who had quite the diatribe on the subject this past week on his show. You can watch that segment below.

Since #Steelers GM Kevin Colbert went out of his way to call Big Ben the "unquestioned leader" of the team, we felt it necessary to clarify the situation for other #NFL teams just in case:#YoureWelcome pic.twitter.com/9vWxoP2pQe