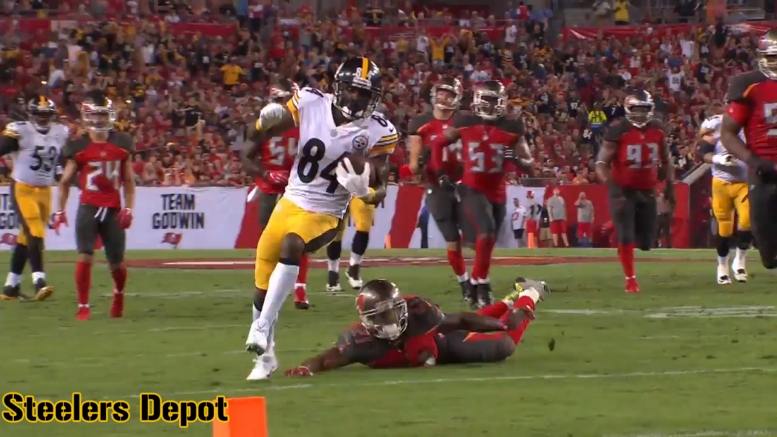 You have to hand it to the Pittsburgh Steelers. Even when they have a player that forces them to nudge them off of their long-standing precedents, they still find ways to fudge the process in a way that allows them to justify shifting gears.

For the moment, wide receiver Antonio Brown is well on his way to forcing his way out of Pittsburgh. He had a face-to-face meeting with Art Rooney II that allowed him to convince the organization that a trade is worth pursuing. But at least on the surface, they continue to make it clear that a trade will only happen under the right circumstances.

“What we’ve also acknowledged is we will only make a trade if it benefits the Pittsburgh Steelers”, General Manager Kevin Colbert just reiterated during his press conference at the NFL Scouting Combine minutes ago. “He knows that, his representation knows that, that’s been clearly explained. And we’re willing to take a look, and if there’s something that can be done that will benefit both sides, great”.

But what is the alternative if they don’t get a deal that they can live with? Rooney said over a month ago that the only thing not on the table is releasing him. “If not, then we’ll deal with that when we get to it”, Colbert said.

“Antonio Brown is one of the best players in the National Football League. And we’d like to have him on our team. So if you lose a player like that, if you decide to take a player like that off your team, you best have the compensation that’ll justify removing that player, and that would be a significant compensation”.

While he would not go into specifics about what sort of deal it would take to get the Steelers to deal Brown, he did suggest that it could involve a combination not only of draft picks but also players. We will cover this in more detail shortly, but he added that interest has grown since his remarks on Friday, and he expects it to grow even more by the end of the Combine.

Asked if he believes there is a path toward reconciliation for Brown in the event that he isn’t traded, Colbert said, “I do”, though that might be a hard sell for many. “If we don’t trade Antonio, he’s going to be back with us. What are the benefits, what might be the drawbacks? We’re always going to balance that out”.

“But we can’t say what’ll happen down the road. As you come out of the Combine, different teams have different feelings about the possibilities of not only a trade but what they might be able to draft”, he continued. “The one thing that doesn’t change is Antonio Brown’s value, not only to the National Football League, but to the Pittsburgh Steelers”.