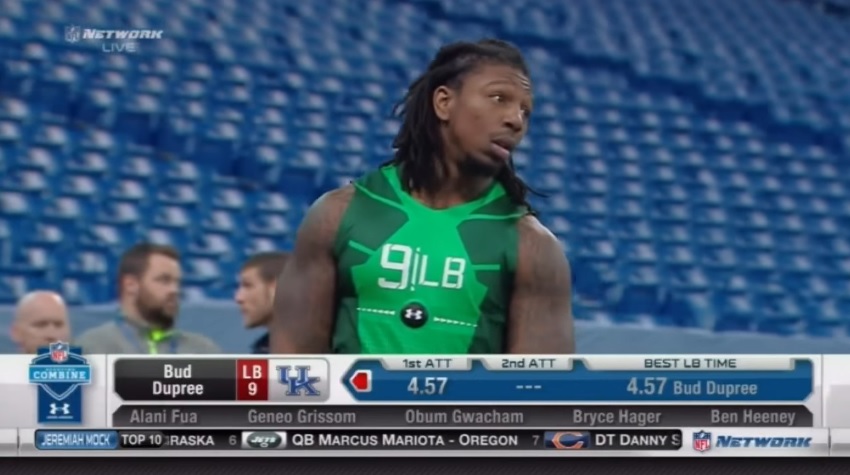 The NFL Combine is an exciting time for you and me. A chance to watch the top prospects in one location, competing in the same drills, with risers and fallers and names the casual fan will get their first exposure too. But for the players, it’s a lot less glamorous.

In fact, Bud Dupree had one word to describe his time in Indy.

“The Combine was dreary,” Dupree told Steelers.com’s Teresa Varley. “It was long. For me it was a bad process because I had a groin injury I didn’t think was going to linger, but it did. It kept me having to do MRIs. Then they wake you up for drug tests. Then you get up in the morning and have to run 40s, do jumps. It was dreary.”

Those are the hidden aspects of the scouting process we don’t think much about. We just watch the fun stuff. The 40 yard dash. Players getting worked through drills. Mark Gorscak being mic’d up. In reality, the day begins at the crack of dawn, woken up to take a drug test. Then there’s the medical component, poked and prodded by all 32 teams – each organization brings their own staff. After that, it’s off to work out, an environment not conducive to peak performance, and the day ends with interviews and psychological testing.

Easy to see why in hindsight, players are thrilled to get it over with.

“I think the Combine is a big mental game to see how people react to things and adversity,” Dupree said. “It’s more mental. The only physical thing is lift weights.”

For Pittsburgh, and I assume most other teams, the vast majority of their draft picks come from the Combine. That’s where the top talent is at but it also provides that complete evaluation that makes a team comfortable submitting the card for that player.

Since 2014, only one of their selections – Keion Adams – wasn’t invited to Indianapolis. In the Mike Tomlin era, only three of their non-combine picks were taken higher than the 6th round: Shaq Richardson, Frank Summers, and William Gay, all taken in the 5th. All three had impressive Pro Day workouts to get back on the team’s radar.