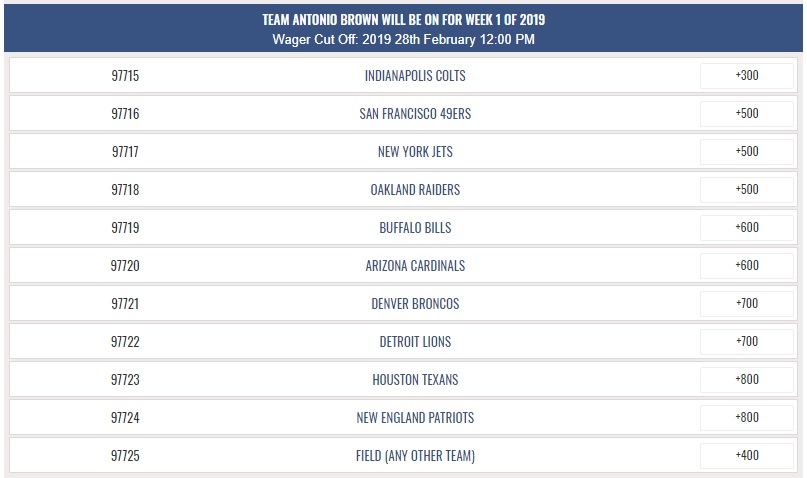 With Pittsburgh Steelers wide receiver Antonio Brown now officially on the trading block as of last week, we’ve seen a few online sportsbook sites update their odds as to which team will ultimately land him this offseason. MyBookie.ag, a sponsor of ‘The Terrible Podcast’, released their updated odds on Brown for 2019 a few days ago and below is my attempt to look at the probability of each of the ten teams listed trading for the Steelers wide receiver ahead of this year’s draft.

Indianapolis Colts – +300 – Are the Colts really the favorites to land Brown this offseason? Didn’t general manager Chris Ballard stress the importance of good culture during his 2018 wrap-up press conference and how that will play a significant part in what his team does this offseason when it comes to deciding which players would be added via free agency or trades? Trading for Brown would go against everything Ballard said and besides, the Colts already have a No. 1 wide receiver in T.Y. Hilton. Personally, I will be shocked if the Colts trade for Brown.

San Francisco 49ers – +500 – Judging by Browns social media actions so far this offseason, he would love to play for the 49ers and with quarterback Jimmy Garoppolo. Sure, the 49ers could stand to add a top wide receiver via free agency this offseason but one must wonder if general manager John Lynch would hacve any interst in trading for Brown due to the organization already going through recent off the field problems with Aldon Smith, Ray McDonald, Bruce Miller, Ahmad Brooks, Tramaine Brock and Reuben Foster. Sure, Brown hasn’t been charged with any domestic-related crimes, but he sure hasn’t been an angel, either. It seems like the 49ers would be inviting more potential problems by trading for Brown. I can almost guarantee you that Lynch won’t give the Steelers the second overall selection in this year’s draft in exchange for Brown as well.

New York Jets – +500 – Sure, the Jets have the available salary cap space to acquire Brown and even give him a new deal if he demanded one. However, do they really want to pair him with young quarterback Sam Darnold? Additionally, the New York media would have a field day with every little wrong move that Brown makes both on and off the field. The Jets traded for former Steelers wide receiver Santonio Holmes several years ago and while that didn’t cost them much in the way of compensation, and that deal happened under the watch of a previous general manager, it still didn’t turn out too well for them. However, of these top three teams listed as favorites to land Brown this offseason, the Jets would probably be the most probable as that team needs to do something to give them a better chance at competing with the New England Patriots in the AFC East division. If the Jets are the team that ultimately trades for Brown, they’re unlikely to give up the third-overall selection in this year’s draft to do so and they currently don’t have a second-round this year to offer up. In short, the Steelers would likely need to take one or both of the Jets two third-round selections as compensation for Brown.

Oakland Raiders – +500 – Now we’re getting warmer. The Raiders have a need an immediate need at wide receiver this offseason thanks to them trading away Amari Cooper last season. They also have a head coach in Jon Gruden who probably believes he can handle Brown’s personality moving forward due to his past experience dealing with diva wide receivers. The Raiders also currently have five of this year’s top 66 selections in the 2019 NFL Draft and that includes three first-rounders. On top of everything else, the Raiders have the available salary cap space to use on Brown and even give him a new contract immediately after trading for him. The Raiders and Steelers also traded wide receivers twice last offseason as Martavis Bryant and Ryan Switzer were sent in opposite directions. In short, the Raiders should probably be considered the favorites to trade for Brown right now.

Buffalo Bills – +600 – The Bills are in a similar situation as the Jets are this offseason as not only could they use a top wide receiver, they also have a very young quarterback, and plenty of salary cap space to work with. However, would the Bills really be interested in parting ways with their ninth overall selection in this year’s draft to acquire Brown from the Steelers? Personally, I kind of doubt that so the Steelers would likely get, at most, the Bills second-round selection this year, which is the 40th overall pick. When discussing the Bills and the Jets as potential landing spots for Brown, however, consider the fact that there was a recent report that the Steelers really aren’t high on trading the wide receiver to an AFC East team and that might be due to the fact that they play that division in 2019. That report aside, those two teams might have the most to offer the Steelers in the form of compensation outside of the Raiders. I consider the Bills a wild card team to trade for Brown and thus won’t entirely dismiss them as a potential deal partner.

Arizona Cardinals – +600 – The Cardinals are yet another team with a very young quarterback and a first-year head coach in Kliff Kingsbury. That team, however, does have solid veteran leadership in the form of wide receiver Larry Fitzgerald and cornerback Patrick Peterson and those two could potentially help keep Brown in line. That said, the cardinals do already have wide receiver Christian Kirk on their roster and he was drafted in the second round last year. I suppose whether or not the Cardinals decide it’s worth trading for Brown might come down to how hard Kingsbury pushes for him. Even so, thers no way the Cardinals would trade away the first-overall selection in this year’s draft to acquire Brown so the Steelers would likely need to settle for their first overall pick in the second round as compensation. If I’m the Cardinals, I stay away from Brown and concentrate on addressing the wide receiver in the draft once again.

Denver Broncos – +700 – You can probably put the Broncos in the same category as the Colts judging by what all new head coach Vic Fangio said after he was hired earlier this offseason when it comes to the importance of team culture and related items. On top of that, Broncos new offensive line coach Mike Munchak would likely give Fangio plenty of reasons as to why the team shouldn’t trade for Brown thanks to his time he spent in Pittsburgh. I just can’t see Broncos general manager John Elway forcing Brown down Fangio’s throat and certainly not at the expense of a first-round draft pick, which is currently 10th overall for this year.

Detroit Lions – +700 – The Lions are an interesting prospect when it comes to potentially landing Brown in a trade with the Steelers this offseason due mainly to the fact that they have a veteran quarterback in Matthew Stafford and a need at wide receiver. While it’s hard to imagine the Lions trading the eighth overall pick in this year’s draft to the Steelers in exchange for Brown, I could see them potentially parting ways with their second-round selection, which is the 43rd overall. Brown played his college football at Central Michigan as well. Like the Bills, the Lions might be a legitimate wild card team to trade for Brown if head coach Matt Patricia is willing to sign off on it.

Houston Texans – +800 – The Texans already have a top wide receiver in DeAndre Hopkins so it wouldn’t make sense for them to trade for Brown, who will likely want even more money after arriving in Houston. Giving Brown even more money than what Hopkins currently makes per season would surely anger the latter. For that reason and that reason alone, I can’t see the Texans trading for Brown.

New England Patriots – +800 – Yeah, like the Steelers would really trade Brown to the Patriots to help them win yet another Super Bowl. While there’s probably no way that would happen, it would be funny to watch Brown have to play with quarterback Tom Brady, who expects preciseness on every single play from every member of the offense. Besides, no way would the Patriots deal for Brown and turn around and give him even more money.

Field – +400 – Of the remaining 22 teams, and that includes the Steelers keeping Brown, one probably needs to consider the Carolina Panthers and Washington Redskins as potential suitors for Brown. The Redskins need to do something drastic this offseaon as not only are they in need of a quarterback thanks to Alex Smith going down last season with a serious injury, they could also use a top wide receiver such as Brown as well. While they wouldn’t likely trade the Steelers their first-round selection this year for Brown, the Redskins do have two third-round selections this year they could entice the Steelers with in addition to their second-round pick, which is 46th overall. The Redskins, however, aren’t currently in great shape salary cap wise this offseason so trading for Brown and then giving him a new contract would require some cap massaging. Redskins head coach Jay Gruden is likely now in a hot-seat year to boot, so he might push for the front office to make an extreme move to help provide the Washington offense more weapons for whomever winds up quarterback the team in 2019 to work with. As for the Panthers chances of acquiring Brown this offseason, I bet quarterback Cam Newton wouldn’t mind another weapon to throw to. The Panthers, however, much like the Redskins, don’t have a ton of salary cap space to work with this offseason and thus that could present a big challenge for them when it comes to potentially trading for Brown. The Panthers, however, also much like the Redskins, have two third-round draft picks at their disposal to play with this year in addition to their second-round selection, which is the 47th overall.

Summary: To wrap this post up, I see the Raiders, Raiders, Jets, Bills and Redskins as the four teams most-likely to trade for Brown in the coming weeks and probably in that exact order. We know that the Steelers won’t trade Brown to the Baltimore Ravens, Cincinnati Bengals or Cleveland Browns and I find it very unlikely that the Kansas City Chiefs and their head coach Andy Reid would want anything to do with Brown as well. Additionally, the Green Bay Packers also don’r sound like a team willing to trade for Brown despite whatever contrary reports you might reading on the internet as of late. In closing, I just can’t see any team, outside of maybe the Raiders, giving the Steelers a first-round draft pick in exchange for Brown.