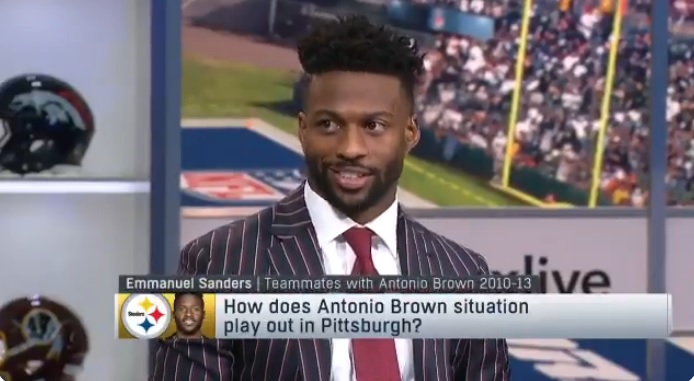 There probably are not a lot of players whose reputations improve in the city after they leave the Pittsburgh Steelers, but if anybody falls under that distinction, it may well be former wide receiver Emmanuel Sanders.

A 2010 third-round draft pick, Sanders spent his first four seasons with the Steelers but never emerged on his own. It was only in year four as a restricted free agent, after Mike Wallace left in free agency, that he entered the starting lineup full-time, and while he had his best season, it was far from worthy of leaguewide acclaim.

But he would sign with the Denver Broncos in free agency and become a top wide receiver in his own right outside of Antonio Brown’s shadow. All three wide receivers would remain in contact with each other over the years as the ‘Young Money Crew’ that was together from 2010 through 2012.

When Sanders first left the Steelers to join Peyton Manning with the Broncos, he made waves back in Pittsburgh when he said that Manning was a far better leader then Steelers quarterback Ben Roethlisberger. He’s feeling vindicates on that front these days.

In referring to Roethlisberger’s comments in the media, particularly on his radio show, regarding his teammates, Sanders was not happy with how his former teammate has chosen to handle his leadership role. “To me, all of that is disrespectful. I would take all of that as disrespect”, he said following a discussion of some of the examples of things he’s said on his radio show.

See what he and the crew have to say about what’s going on in Pittsburgh 🔽 pic.twitter.com/RbKSJbpTmQ

“I remember talking to Mike Wallace, and me and Mike Wallace were talking about this situation. I said, ‘if Ben called me out on a radio show, the next day I would be walking up to him in the locker room and saying, ‘man, don’t do that. Keep my name out of your mouth’”.

He referred specifically to Roethlisberger’s comments following the Steelers’ game against the Broncos in which rookie wide receiver James Washington failed to run under a deep pass that should have been a big play. “Even the game versus us, the rookie receiver. He threw the rookie receiver under the bus”, he said.

“It’s like, you’re the leader of this team, be a leader. That’s the reason why my comments when I first became a Denver Bronco, and I said Peyton Manning was a far better leader than Ben Roethlisberger, that’s the reason why all that now is coming to fruition. I don’t lie, I don’t hate anybody, I just speak the truth, and that’s the truth”.

As I’ve said in the past, I haven’t had nearly the sort of issues that others have had with Roethlisberger’s public comments, but the thing is that it doesn’t matter how I interpret it. The most important thing is how his teammates interpret his comments, and it sounds like that has become a significant issue in the locker room.