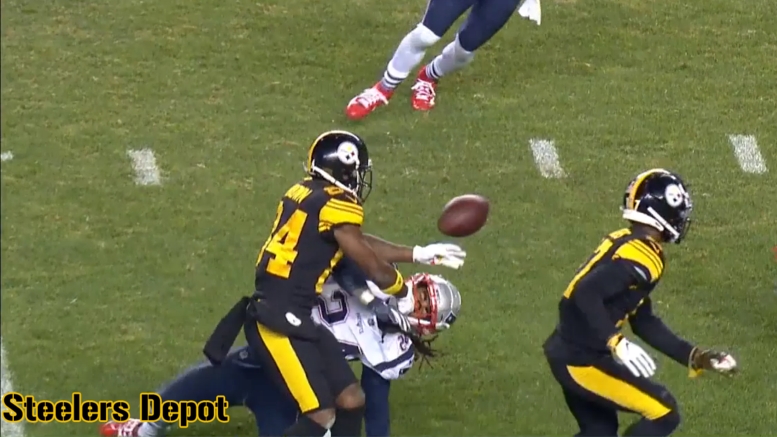 For Antonio Brown, Sunday’s game wasn’t particularly special. He caught just four passes, a season-low, for 49 yards, though he did score a league-high 13th receiving touchdown. Though Pittsburgh Steelers quarterback Ben Roethlisberger threw for a season-low in passing yardage, a lot of Brown’s low numbers had to do with New England Patriots cornerback Stephon Gilmore.

In fact, both of the Patriots’ starting cornerbacks actually had good games overall against Brown and JuJu Smith-Schuster. The two of them combined for just eight receptions for 89 yards and the one touchdown. Ordinarily, one of them would have a stat line like that in a single game on their own.

Though Gilmore called it “fun” to go after Brown for most of the game, saying that “he’s one of the best receivers today”, he did take issue with one sequence during the Steelers’ drive in the third quarter of the game.

“He did a little dirty move, grabbed my helmet, threw me down”, the cornerback said. “That was super dirty. But other than that, [it was] just competing on the field”. The broadcast never really gave a clear view of this incident, however.

Brown currently has 90 catches on the season for 1122 yards and a league-high 13 receiving touchdowns. The latter number ties not only a career-high but also a franchise-best, his own record. He needs 10 receptions over the next two games to reach 100 or more receptions in six consecutive years. He already has his sixth consecutive 1000-yard season.

As for Gilmore, he is having a better and more stable second season in New England with two interceptions and 18 passes defensed. While he hasn’t been getting some of the interception totals that he had in Buffalo—he had five in 2016 before signing with the Patriots—he has been one of the best defenders in the league in terms of making plays on the ball.