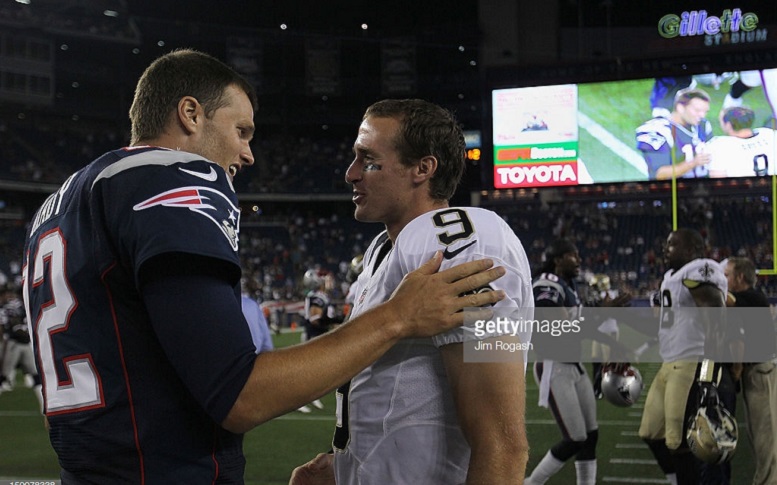 The Pittsburgh Steelers beat quarterback Tom Brady and the New England Patriots at home last Sunday and this Sunday they’ll attempt to beat quarterback Drew Brees and the New Orleans Saints on the road. That game between the Steelers and Saints will also mark just the 13th time that one team has played against quarterbacks Brady and Brees in any order in consecutive weeks of a regular season.

“I don’t know. I’d have to look back,” Roethlisberger said. “It’s pretty special, two Hall of Famers, two of the best that have ever done it so it’s pretty cool.”

When he was with the Buffalo Bills in 2002, Drew Bledsoe became the first quarterback to attempt to beat Brady and Brees in consecutive weeks during the regular season. While he was able to lead the Bills to a 27-17 win over Brady and the Patriots, he lost 20-13 the next week to Brees, who was with the San Diego Chargers at the time. Tim Couch in 2003 as a member of the Cleveland Browns was the next quarterback to play Brady and Brees in back-to-back weeks and he lost to both of them.

After Bledsoe and Couch both tried and failed to beat both Brady and Brees in consecutive weeks during a regular season there have been 10 more teams that also failed to do so. Those teams were the Miami Dolphins, Kansas City Chiefs, Tampa Bay Buccaneers, Minnesota Vikings, Washington Redskins, Indianapolis Colts, Dallas Cowboys, Los Angeles Rams and Carolina Panthers. The quarterbacks who have tried and failed to beat Brady and Brees since Bledsoe and Couch were unable to were Jay Fiedler, Brian Griese, Trent Green, Josh Freeman, Matt Cassel, Kirk Cousins, Andrew Luck, Brandon Weeden, Jared Goff and Cam Newton.

While Brady and Brees have never been beaten by the same team in consecutive weeks during a regular season, the Denver Broncos and quarterback Jake Plummer did beat the two future Hall of Famers in consecutive games in 2005. However, the first of those two games took place in Week 17 of the regular season as the playoff-bound Broncos easily beat the already eliminated Chargers team 23-7. While Brees did start at quarterback in that game for the Chargers, he was injured late in the second quarter during a sack and Philip Rivers relived him and closed out the game.

Two weeks after beating the Chargers to secure the No. 2 seed in the AFC, Plummer and the Broncos beat Brady and the Patriots 27-13 in the Divisional Round of the playoffs. Strangely enough, Roethlisberger and the Steelers beat the Broncos that the following weekend in the AFC Championship game and in Denver at that.

The Browns also beat Brees and Brady in consecutive games during the 2010 regular season but a Cleveland bye week did separate both wins. That quarterback was Colt McCoy.

Roethlisberger pulling off the second half of the yet-to-be-done beating of Brady and Brees in consecutive weeks will also require another first from him as well as he’s yet to win an NFL game during his career in New Orleans.