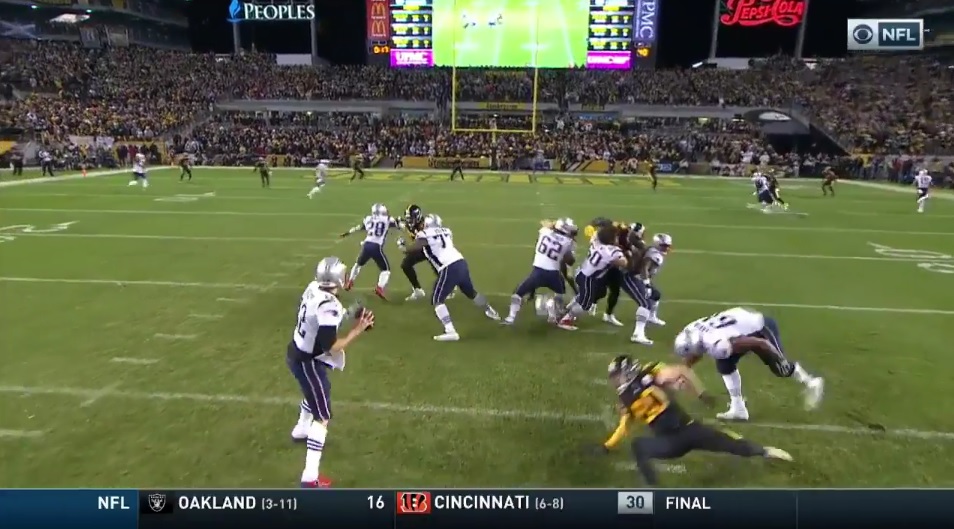 We know how good the Pittsburgh Steelers’ red zone offense has been this year. Historically so. The defense? Average, at best, and lately, a group not capable of holding teams to field goals. But they flipped the script Sunday to beat the New England Patriots. And it made all the difference.

Want to know why the Pats were held to just ten points? They were 0-3 when they marched inside the Steelers’ red zone. Twice, they came away without points.

They didn’t make their first trip until late in the third quarter. Facing 3rd and 4 from the Steelers 13, they ran the tunnel screen Pittsburgh stole weeks ago. So the defense has seen it and knew how to defend it (they did so twice yesterday). The defense rallied to the football, four Steelers join in on the tackle, and stop Julian Edelman a yard shy.

New England had to settle for a field goal, making it a 14-10 game.

Twice, they turned away Tom Brady in the fourth quarter. There was Joe Haden’s interception after Brady failed to throw the football away. Haden high-pointed the football in the air, got both feet inbounds, taking cues from Antonio Brown, and finished the play.

And of course, there was the game-ender. 4th and 15, Brady heaving the ball into the end zone, knocked down by Morgan Burnett.

Want to know the last time the Patriots finished a game so poorly in the red zone, 0-3 or worse? You have to go back to Week 17 of the 2014 season, a game where Brady played half the game and Bill Belichick rested several starters.

Since 2015, the Pats have gone a combined 13/16 in their four meetings against the Steelers, over 81%. Yesterday, they got shut out. What a performance by this unit who from the third snap of the game on, played as well as you could hope for.