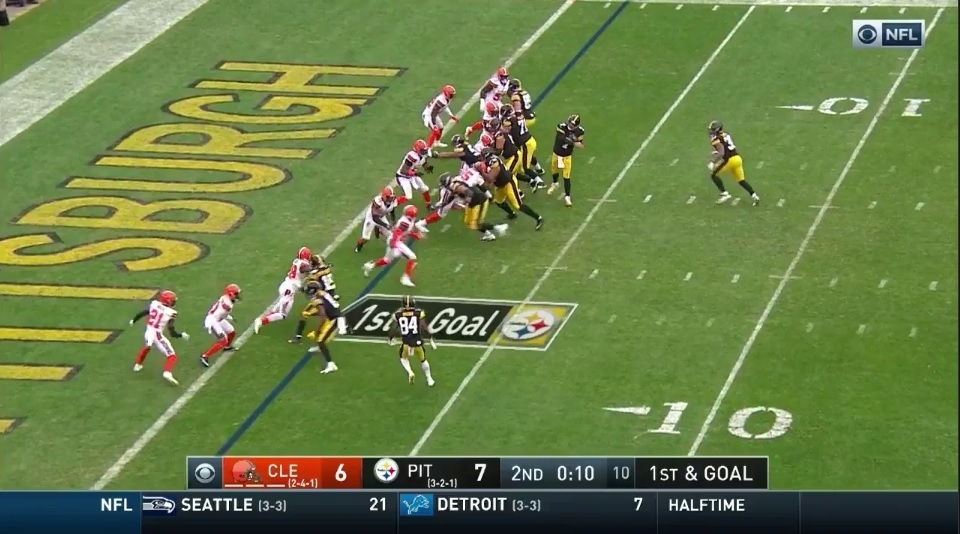 For the last two games, the Pittsburgh Steelers have relied on a particular goal line play in big moments. They’ve run tunnel screens, one to JuJu Smith-Schuster against Cincinnati, the other to Antonio Brown yesterday against Cleveland, that felt unstoppable. Smith-Schuster was a two-point play, Brown a touchdown, both almost end zone walk-ins.

So where did the play come from? Was it a two-point play Pittsburgh has run since training camp? An ace up Randy Fichtner’s sleeve he’s been scheming since becoming offensive coordinator? A throwback to a Steelers’ play from a decade ago?

They took it from the New England Patriots.

And hey, that’s not a bad thing. I’m not critical of it one bit. That’s how the NFL works. You look around the league, see what other teams are doing well, and borrow it. That’s why everyone is raving up about what Sean McVay and Matt Nagy are doing, taking their ideas and applying it to their squad. Teams are running these jet “pass” plays because someone started doing it and it worked well. Now half the league does it. Ditto with RPOs.

This isn’t just a guess from me. Ben Roethlisberger admitted the idea came from somewhere around the league when asked about the play in his post-game press conference.

“That’s a play that we’ve put in the playbook a few weeks ago. Got it from another NFL team who likes to do that play. It worked. JuJu caught it against Cincinnati for a two-point. And then AB caught it this time. Same play…it’s almost like a screen in a way.”

Roethlisberger, understandably, didn’t share what team it was. So I dug around and found it.

Of course, of course, it’s from the Patriots.

Here they are running it the week before the Steelers did, Week 5, hitting Cordarrelle Patterson for a one-yard score. Trips to the boundary motion the receiver in, tunnel screen with two lead blockers. Happens so quick, it’s hard for the defense to rally in time. And it’s good for a touchdown.

The Patriots used it in Week 7 against the Chicago Bears too, though by that time, the Steelers already scooped it up.

Ctrl C went the Steelers. Here is Smith-Schuster’s grab against the Bengals. Trips, motion in, tunnel, and score.

Same concept against the Browns, this time finding AB.

This might be a play the Steelers will have to put in their back pocket for a couple weeks, considering how close yesterday’s score was to being picked. The safety knew what was coming and jumped the throw, narrowly missing what would’ve been a pick six at the end of the half.

But all good teams study the rest of the league and add what works when it meshes with your scheme and playbook. This one sure has and that TD before the half yesterday couldn’t have come at a bigger time.