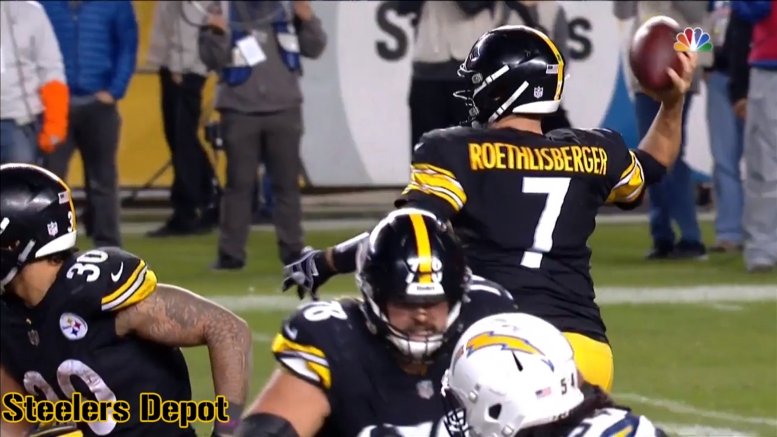 If there is one thing that the Pittsburgh Steelers are not concerning themselves at all about this season, it is the concept of the run/pass ratio and the idea that offensive success can only—or at least best—be achieved by having an equitable if not roughly equal number of carries and passes.

The Steelers have the most imbalanced run-pass ratio in the league, yet are also one of the top-scoring offenses in the league, so it’s a difficult pairing to consider. It’s also hard to directly attribute any of their losses to the lack of a running game.

But it always gets brought up after losses, and both quarterback Ben Roethlisberger and Head Coach Mike Tomlin had to answer questions about the topic yesterday. Roethlisberger was asked about the run-pass ratio on his radio show and reminded that the week before it had to do with a lot of RPOs going for passes over runs.

“We didn’t have as many pass/run options as we did the week before. We still had four or five I think, if I remember correctly”, he said of Sunday’s game. “I don’t think that there’s any reason for people to get worked up over the number of runs compared to passes. At the end of the game you’ve kind of got to go down the field on that last drive, so we’ve thrown it every play”.

Roethlisberger brings up an important point, because the Steelers are also among the league leaders in terms of plays run inside the final four minutes of halves (they also have been good in turning those plays into points). When the clock is short, every second is more valuable, and that leans toward throwing.

“But you know what, it’s the way they dictated it”, he went on, referring specifically to the Chargers’ defense. “They’re a Cover 3 team, which means they have a safety down in the box, which takes away the run a lot, so that kind of dictates you to pass it. People are always going to get worked up over the numbers, when you lose especially. I don’t think people would have gotten as worked up if we won the game”.

Tomlin already answered these questions last week about how he views balance on an offense, so when the question came up once again, he just paraphrased what he had already said. “I’m not concerned about it. Like I’ve often said in here, we’re gonna be thoughtful in what we choose to do”, he said.