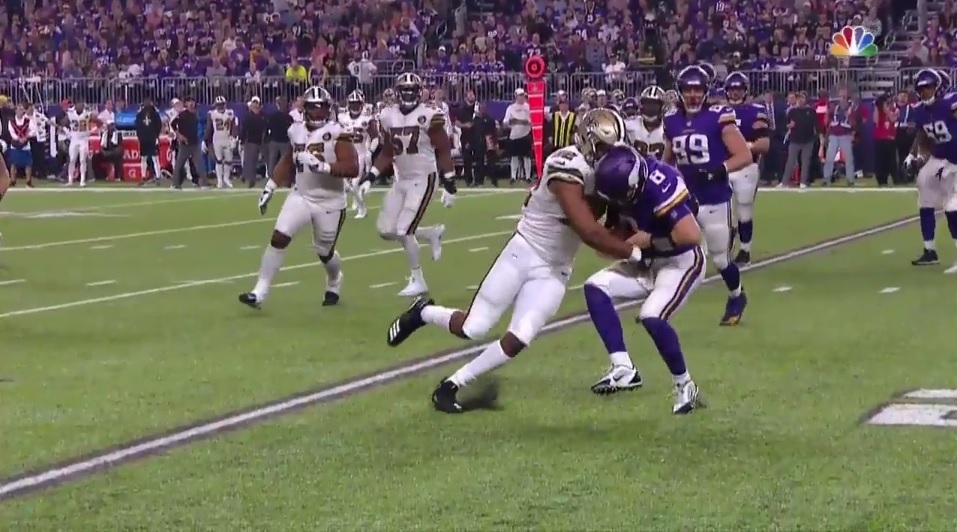 Before talking about a specific element of the defense, you have to talk about how well they’re playing as a whole. Six straight games keeping teams under 17 points, the longest such streak in the league this season. Only one other defense, Baltimore, has done it even four times in a row. For the year, they’re 7th in points per game allowed.

The run defense is excellent in volume and efficiency. They’re tied for 2nd in yards per carry allowed at just 3.7 yards per carry. As you’d expect by such a low average, they don’t give up the big play either. Second fewest runs of 10+ yards (just 26 all season) and seventh fewest of 20+ (seven).

It’s a 4-3 front. Cameron Jordan and Alex Okafor are the starting DEs with Sheldon Rankins the three tech and Tyler Davison the one tech. Like any even front, there’s considerable rotation. Seven d-linemen have played at least a quarter of the snaps this year.

Main rotational pieces include first round pick Marcus Davenport at defensive end. Along the interior, you’ll see David Onyemata and Taylor Stallworth. At end, there is less rotation than other teams though. Jordan plays a crazy amount of snaps, 88% of the time, fourth highest among off d-linemen in football.

At linebacker, in nickel, you’ll get Demario Davis, leading the Saints with 103 tackles, four sacks, and a pair of forced fumbles. A.J. Klein plays next to him. In base, the talented, but in college at least, rarely healthy Alex Anzalone steps in. He’s the MIKE linebacker with Davis the WILL, Klein the SAM.

Overall, the front does a great job of keeping their linebackers clean and unblocked. Let them roam and make plays. Steelers’ line is going to have to do a great job of getting to the second level to pick some of these guys off. Watch Klein (#53) come in free here for a two yard tackle.

Two other stats. Unit has struggled on third down (22nd) and in the red zone (21st). Two areas this Steelers’ offense can win.

If you’re looking at the numbers for the entire season, you’ll probably evaluate the secondary as a struggling unit. For the first half of the year, you’d be right. Then they traded for Eli Apple, everyone else started to play better, and this unit has begun to click.

Perfect example. On the year, they’ve allowed 25 passing touchdowns, a below average figure. But since Week 10, when this defense began to figure it out, they’ve given up only seven, which puts them in the top third. Over that same time frame, they’ve given up only 11 completions of 20+ yards, 5th best in the NFL. Stark contrast to their season figure, which ranks them 17th.

They are getting plenty of pressure this season. 45 sacks in 2018, one behind the Steelers. Jordan paces the group with 12. Rankins is having a breakout year on the interior. Over his first two years, he had just six sacks. This year? Already up to eight. He’s going to have a great battle with David DeCastro.

That’s translated into 12 interceptions. Six by the corners, four from the safeties, and a pair by the linebackers. Several guys tied with two. Group effort, not from just one dude. Marcus Lattimore has forced four fumbles though from his cornerback spot and he’s the best guy they have here.

At corner, you have Lattimore and Apple as the starting corners. P.J. Williams enters in their sub-packages. As pointed out by beat writer Nick Underhill on the Terrible Podcast, in base packages, Kurt Coleman is the strong safety. In sub, he’s replaced by Vonn Bell who in the tape I watched, is playing really well. Marcus Williams is opposite.

Get a lot of Cover 2 from them on early downs. The last two weeks, that’s what they’ve used on the first pass play of the game. If I’m Pittsburgh, I’m running a smash concept (curl/corner) on the first play and try to hit the corner along the sideline for a big gain.

Also will play plenty of 2 Man. Corners taking away the inside, safeties playing over the top. A coverage the Steelers have had issues with before.

For a 4-3 defense, they do blitz frequently combined with plenty of stunts and slants by the DL. They like this LB scrape into the B gap with the tackle crashing down inside to create the lane while the end stays wide.

The Saints have blocked two punts this season. The first against Atlanta seemed like a slow operation by the Falcons (though starting DE Okafor blocked it, he remains on this unit), while the second was a nice stunt to get QB Taysom Hill free.

With one of the league’s stout defensive fronts, the Saints defensive line has been the biggest piece to New Orleans’ NFL-leading rush defense. And when it comes to breaking down the individuals along the line you’ve got to start with none other than Cameron Jordan.

In his 8th season Jordan is firmly in his NFL prime. With 12 sacks so far, Jordan is on pace to break his career-high sack total (13 in 2017) and he’s already matched his career-high in tackles for loss (17). When the Saints last played the Steelers, Jordan had a pretty solid afternoon totaling a sack, an interception, and 6 tackles.

Jordan’s pass rush is often very simple, yet extremely effective, and he can generate pressure even when facing a double team. Check out this sack against Tampa Bay just a couple weeks ago.

Jordan (#94) is in a two-point stance and faces the tight end right off the snap. The tight end attempts a chip, but Jordan expects the confrontation and instantly swims outside the tight end. Now matched up with the right tackle he stutter-steps keeping the tackle from solidifying a base, and explodes using an inside swim straight into the pocket. With pressure from the outside (Davenport) there’s nowhere for Jameis Winston to go and it’s a big-time sack for an 8-yard loss. His high motor, paired with impressive athleticism and great power makes Jordan an every-down threat to wreak havoc on an offensive line.

Rankins and Davison are some big dudes with good length at the position. Rankins is a bit lighter but is able to maintain his gaps well. Davison is bigger and longer, moving well laterally and exhibits good play recognition upon the snap.

Okafor is another solid veteran that can play form the two or three-point stance. Uses a power rush well and contains the edge very well.

Davenport has been a very impressive rookie for the Saints. Has great speed and uses his hands very well. Violent at the point of attack, and as you’ll see below, excellent at disengaging.

Davenport runs into a double team taking on the left guard and tackle after holding his gap for the possible run. Notice his awareness on the field while rushing the passer, getting his hands up to block the throw while not losing leverage in the double team. Once Kirk Cousins breaks the pocket, Davenport gives the tackle a violent shove with his right hand crossing over the tackle setting up the angles pursuit of the quarterback. Davenport’s speed shows up here. He runs down Cousins within two seconds of him rolling out, and almost comes away with the forced fumble, too (ruled down after review). He gets after it, as does this whole line, so typically broken plays turn into an even worse outcome for the opposing offense.

MIKE linebacker Alex Anzalone, Demario Davis is the WILL, and A.J. Klein is the SAM.

This unit is made up of two veterans (Davis/Klein) and a second year pro in Anazalone. These guys might not jump off the page as being among the leagues top linebackers, but they do a lot of things well. They’re athletic and exhibit good speed for the position.

Klein has good instincts and is rarely in the wrong spot. He’s capable of disengaging and running down the backs from side to side. Good with his hands once taking on blockers. Anzalone isn’t as great one-on-one with offensive linemen, but he shows great speed and is able to get to his spot and re-route the running back. He’s still growing in his role as the mike, but has plenty of upside. All of them are good in zone coverage, but can struggle in man, although Klein has done well matched up on tight ends.

Not a whole lot to cover with these guys as they are often the intermediate between the strong front-four and playmaking secondary, but the fact they don’t make many mistakes is why the d-line is able to do what they do so well.

RCB Eli Apple, LCB Marshon Lattimore. Kurt Coleman is the strong safety, and Marcus Williams is the free safety. PJ Williams will see time in nickel formations, usually in the slot, but Lattimore will cover slot from time to time as well. Vonn Bell is used in several situations as a hybrid in dime etc.

Lattimore is a crazy good talent as we all saw last year in his defensive rookie of the year campaign. Phenomenal ball skills, great range, and able to run with the best of them. He creates plays and can single-handedly change a game, and while he doesn’t have last year’s numbers he’s just as dangerous.

Eli Apple is becoming a solid number two after some struggles in NY. He has exceptional ball skills, but does get caught up with some of the sharper route-runners, often getting baited into some pass interference calls. But all being said he’s a good option opposite Lattimore.

Bell is tenacious in the run-game. Perhaps one of the more underrated safeties in the league. He’s a swiss army knife for this defense. Has a nose for the ball and is a great playmaker. Has a knack for forcing fumbles (similar to the style of peanut Tillman), and can shed receiver blocks quickly. Great closing speed to run down backs along the sidelines, and isn’t afraid to take on offensive linemen as a pass rusher. 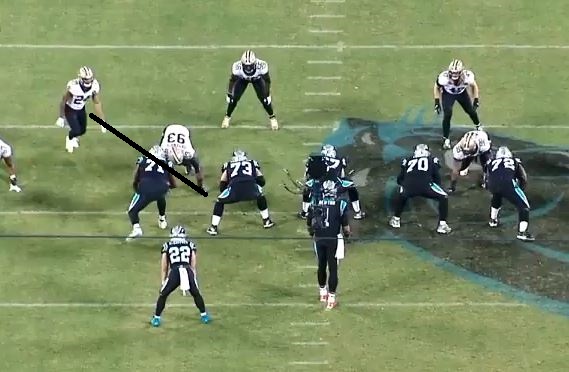 Bell creeps up to the box from the free safety position here and gets a running start targeting the “B” gap. The left guard, accounting for the blitzing linebacker gives Bell and arm to stall his rush and moves on to the backer, but Bell throws an arm into the shoulder pads maintain his momentum into the backfield. 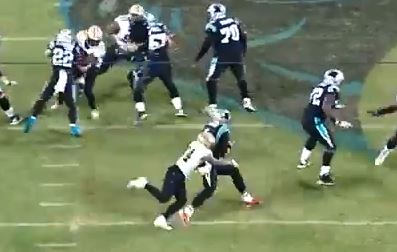 Christian McCaffery chooses to go after the linebacker, and with that it’s all Bell alone in the backfield for the sack on Cam Newton. The Steelers have to account for Bell in these situations and it’s going to take a lot of communication along the line to manage the safety blitz.

Plenty of good players to go around on this defensive unit, and they may very well have the most talented depth in the league. Guys coming in rotation are just as dangerous as the starters in many instances. Huge test for Pittsburgh Sunday.