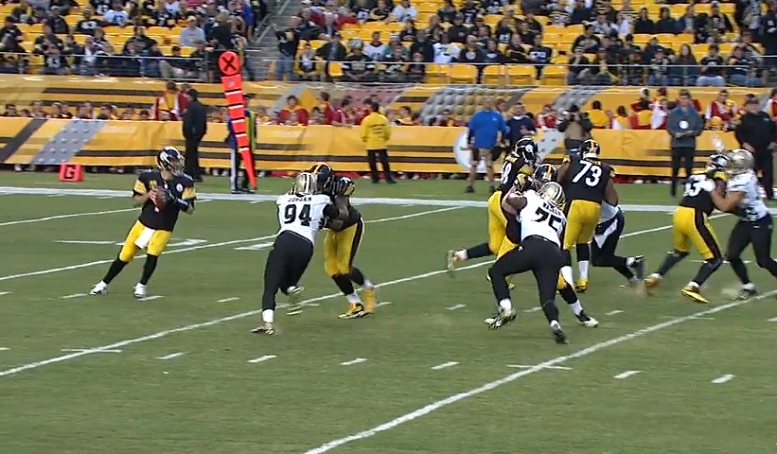 During a Wednesday exchange with members of the Saints media that you can see below, Jordan questioned the Hall of Fame credentials of Pittsburgh Steelers quarterback Ben Roethlisberger in addition to saying that he shouldn’t even currently be considered one of the NFL’s top-5 signal-callers.

"Is that true?…I'd honestly put Eli [Manning] before I put Ben."

Saints' Cam Jordan hearing that Ben Roethlisberger is considered a future Hall of Famer and a top 5 QB of his era 👀 pic.twitter.com/Qo2tSLid4F

“Is that true?” Jordan said when asked about facing a potential Hall of Fame quarterback on Sunday in Roethlisberger. “Really? In this era?”

“I would put Eli before I would put Ben. Agree to disagree, Jordan said.

After the bulletin board material flowed out of Jordan’s mouth, he later offered up some praise of Roethlisberger and the Steelers offense.

“Big Ben is a monster of a quarterback in the backfield. He is able to extend plays,” Jordan said. “He has one of the top duo wide receivers in the league.”

After the video of Jordan’s interview that was posted originally on the Saints official website started to pick up traction on social media, it was soon deleted by the team.

After Steelers Thursday practice had concluded, center Maurkice Pouncey was asked to respond to Jordan’s comments on Roethlisberger.

“It’s totally fine. There are a million people that think that he is,” Pouncey reportedly said, according to Pittsburgh Tribune-Review.

Jordan, who enters Sundays game against the Steelers having already registered 12 sacks so far this season, will now have a chance to take Roethlisberger down on the field Sunday in New Orleans. In the only other game that Jordan has played against the Steelers that took place in Pittsburgh during the 2014 regular season, the former first-round draft pick sacked Roethlisberger once.

Steelers right tackle Matt Feiler and guard David DeCastro will mostly be saddled with the job of keeping Jordan away from Roethlisberger on Sunday and the former is likely to receive a little help in the form of a chipping running back or tight end throughout the contest.

Should the Steelers somehow find a way to beat Jordan’s 12-2 Saints on Sunday in their own backyard, I imagine Roethlisberger will take a jab back at the New Orleans defensive end not long after the game has ended. Until then, however, we’ll have to wait and see if there’s anymore back and forth of words from either team concerning Jordan’s comments prior to the game gets underway.