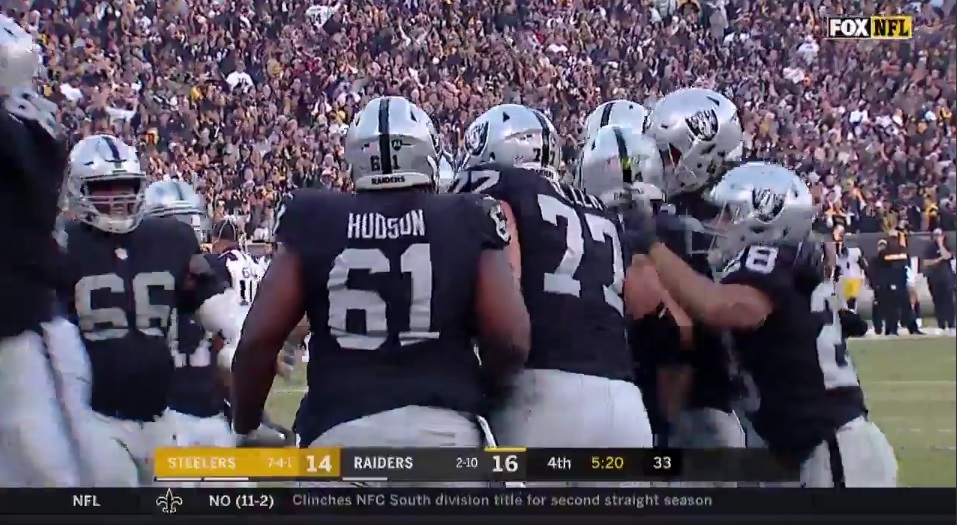 The long regular season is causing wear & tear on the Pittsburgh Steelers roster. James Conner is missing his first game. Other players are playing after getting injured during the past two games. James Washington has a renewed opportunity due to Justin Hunter’s shoulder injury. On paper, the Steelers should defeat a beleaguered Oakland Raiders team. But the Steelers have not won in Oakland since 1995. They have lost several times when heavily favored to win. Time for Stevan Ridley and Jaylen Samuels to be the next men up at running back.

I won’t be able to watch the game live tonight. Currently in Djibouti and have my alarm set for 1230 AM to listen to the game. Anxious to hear if the Black & Gold can snap their two-game losing streak and shed some light in the Black-Hole by lighting it up with an offensive & defensive display of dominance.

Matthew Marczi described what we should watch for in the game.  Tight end Jared Cook is having a career year. Can he be contained?  The status of cornerback Daryl Worley is unclear. May be opportunity to take advantage of a shorthanded secondary. The Raiders have just 10 sacks this season. Can Ben Roethlisberger keep a clean uniform? Conversely, the Steelers defense has an opportunity to take advantage of an offensive line that is not fully healthy.

Alex Kozora predicted the factors that would lead the Steelers to win or lose the game. In sum, the Steelers win if they control both lines of scrimmage, offense converts 3rd downs run, run out of 11 personnel to take advantage of Raiders poor nickel defense against run. Alternatively, they lose if Jared Cook not neutralized, wide receiver Marcell Ateman has a career day, and if Jon Gruden successfully uses trick plays.

The mystery is why Ben Roethlisberger was kept out until desperation time. When he was in it looked like he could get the offense moving. Unfortunately, Josh Dobbs flunked his audition as the next man up at quarterback. Four drives with two punts, a failure to convert on 4th down and an interception. Neither Jaylen Samuels or Stevan Ridley got the running game moving early in the game. Was it the failure of the offensive line to open holes or the runners to exploit them? It doesn’t matter. The Oakland Raiders with one of the worst rushing defenses shut them down. An embarrassment.

The pregame analysis made it no secret. The Raiders had one big offensive weapon. Shut Jared Cook down and it was unlikely the Raiders would score. The weakness was an offensive line that could not open holes for their runners or protect Derek Carr from sacks. Cook ended up 7 receptions for 116 yards. The Raiders converted two fourth down plays, the last for the winning touchdown. Two fourth quarter drives for 73 & 75 yards. Just one stop to force a field goal or turnover on downs the difference in the game. The secondary could not make a play when it was needed.

Two plays. A 39-yard field goal attempt missed. A final attempt to force overtime and a slip on the field. Chris Boswell was last season’s hero. This game he was the goat and I don’t mean greatest of all time. Should the Steelers stick with him for the rest of the season or is he done?

There were 739 1st half comments . Thomas hmmmm was sticking a knife in the running game after Stevan Ridley’s rushing TD early in the game, “There you go fellas we just saw the last rushing attempt, until the last minute of the 4th quarter.” Jaybird problems with coaching and not players, “It’s not so much the players- we are continually beaten in schemes. We lose the X’s and O’s all the time.” Steely McBeam observed that “We gotta win this. Pretty much everything went our way today.” Unfortunately, it was not to be.

Steelers Depot respondents met the standard in the 2nd half with 1284 comments but not all are repeatable. Doug Miller captured the frustration with the entire coaching staff, “We are the most poorly coached team in the NFL, top to bottom.” Mr. Wirez continued on the theme, “Good teams have good leadership from the HC on down. They’re not a good team. I hope they change the management.” Sir Notrightinhead agreed, “Our coaching is High School level.” To cap the frustration, Patch was actually regretted Baltimore losing, “Too bad the Ravens lost. Could have put us out of our misery. Time for Rooney to think really hard about Tomlin.”

Just a few weeks ago, it looked like the Steelers would coast into the playoffs. Now, it is a question if they will even make it despite the Baltimore Ravens losing Sunday. Mike Tomlin made some incomprehensible decisions. The biggest to me is if Ben was cleared to play at the half, why wait until little more than 5 minutes left win the game to put him in? Three more games to go. Tick, tock.

In the 2018 Memorial Day Weekend: Steelers Friday Night Five Questions, I committed to play songs that Steelers Depot respondents suggested might be the new Steelers anthem if Renegade by Styx was ever replaced. Here is entry 35 of 45 from Jeremy Miler: Break Stuff by Limp Bizkit.