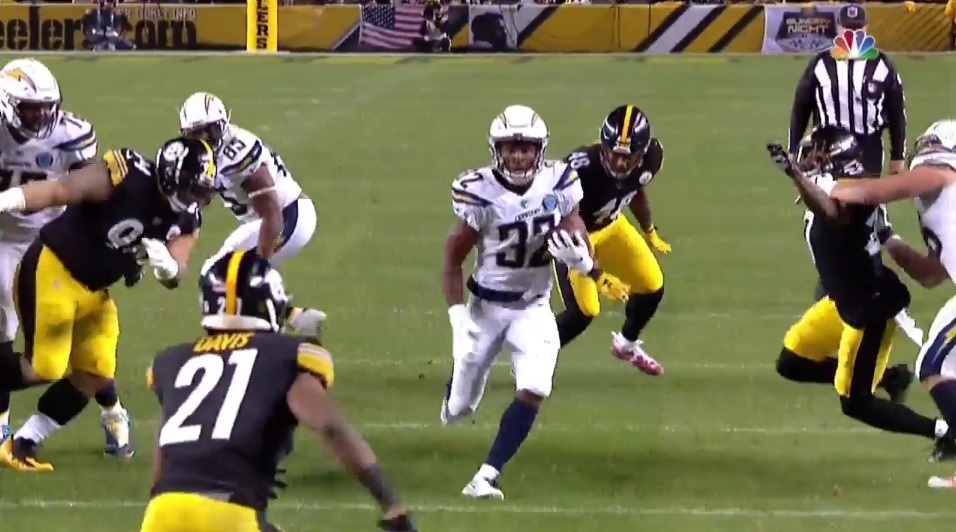 This game took on more importance as the Baltimore Ravens won to stay on the Pittsburgh Steelers heels in the AFC North. Pittsburgh got no help as the Kansas City Chiefs, New England Patriots and Houston Texans all won their games.

Matthew Marczi described what we should watch for in the game.  Pittsburgh must protect the ball on offense and go for takeaways on defense. Particularly, Joe Haden, Mike Hilton & Sean Davis taking risks to intercept the ball. Will James Conner bounce back with a productive game? Will James Washington be active? Stephon Tuitt and Javon Hargrave must stuff the run game. Who will the dime defender be? Marcus Allen & Ola Adeniyi impact on game. Will Bud Dupree play? Finally, watch how the Chargers use Casey Hayward in pass defense.

Alex Kozora predicted the factors that would lead the Steelers to win or lose the game. In sum, the Steelers win if the defense protects middle of field, cornerbacks win contested throws, Alejandro Villanueva stops pass rush one on one so Matt Feiler has help. Alternatively, they lose if the nickel blitz is unsuccessful, linebackers can’t cover Austin Ekeler, the offense does not score touchdowns from the red zone.

The Steelers scored points on 4 of 6 drives in the first half. The Steelers started with a short field following a missed Chargers field goal. Ben connected with Antonio Brown early with two completion for 55 yards. James Conner capped the first drive with a one-yard run.

The Steelers did receive help from a defensive pas interference call when Ryan Switzer was mugged in the end zone in the second drive. Conner took two straight runs to score again. The Steelers third drive ended with Ben’s floater that was intercepted at the 8-yard line. Another scoring opportunity squandered when Ben missed Justin Hunter who was all by himself. Instead of a touchdown, the Steelers settled for a field goal and Hunter was lost due to a shoulder injury. The final drive of the half ended with a beautiful touchdown pass to AB.

What a contrast. After a strong offensive showing in the first half, Pittsburgh forced to punt on first three drives in second half. Pittsburgh did manage to tie the game on their final possession.

The first drive stunted after a 22-yard James Conner run negated by a holding penalty on Ramon Foster. Was it really an egregious hold? The second drive again stunted by a holding penalty on Alejandro Villanueva. Instead of 3rd and 1 it became 3rd and 29 after the penalty and then a sack by Joey Bosa who just spun inside and got to Ben. This holding penalty was clear. The Steelers respond with a 3 and out on their 3rd drive following the Chargers punt return touchdown.

Pittsburgh’s offense finally started slicking after they fell behind 23-30. The Steelers lost a timeout when challenging a bad spot. It was clear that he made the sticks, but Conner converted the fourth down on a plunge. It won’t be surprising if Ryan Switzer ends up in concussion protocol after a clear helmet to helmet shot by Jatavis Brown. The referees did call it. Unfortunately, the Steelers would not get a fifth drive in the game and had to sit on the sideline helplessly as the Chargers drove down the field and eventually kicked the game winner after a couple of penalties.

The Steelers defense played a strong first half despite the referees missing four clear pre-snap penalties on the Charger’ right tackle and one by the left tackle. The referees were quick to penalize T.J. Watt for offsides in the first drive (it was declined) but seemed to ignore constant movement by the Chargers offensive line. The 52-yard field goal attempt was no good.

The Steelers stuffed the run and Terrell Edmunds recorded his first sack. Unfortunately, the referees allowed the right tackle to get up and take a step back prior to the ball being snapped on a touchdown pass to Travis Benjamin. The defense forced four punts and blocked one that was touched beyond the lone of scrimmage, but Jordan Dangerfield recovered the ball. This gave the Steelers great field position but only came away with a field goal. Fort looked good covering receivers this half.

The Chargers only had three possessions in the second half but made the most of them. Two touchdown drives and then the final field goal that ended the game. Philip Rivers absorbed hits but delivered some clutch passes as he went down.

The Chargers first drive should have ended with an interception in the end zone. However, Joe Haden had the ball popped out of his hands as Sean Davis and he collided, and Keenan Allen was able to stay focused and catch the ball before it hit the ground. I don’t believe Davis had any time to adjust his trajectory and Haden was shaken up. Antonio Gates then beat Artie Burns for an uncontested two-point conversion.

The next defensive series followed the touchdown return and Steelers 3 and out. In this drive, the Steelers defense appeared desperate to deliver a big play, but no one delivered. Justin Jackson who began the year on the practice squad owned the Steelers defense. He caught one ball for 19 yards. Plus, had two 18-yard runs. The second for a touchdown. The key play of the last drive came on it only 3rd down. Keenan Allen caught the first down pass while covered by linebacker Jon Bostic. Instead of trying a 52 yarder with time still on the clock, Pittsburgh was left trying to desperately block a chip shot field goal to force overtime. Someone must ask Keith Butler why linebackers are trying to cover wide receivers. That is a mismatch that is doomed to fail.

The big play on special team was the Chargers 73-yard punt return for a touchdown. Jordan Berry may have not had good hang time on his 57-yard punt but the two blocks in the back that were not called certainly helped in the score. Brian Allen was right there to make the tackle when blocked from behind. Berry’s other punts had the Chargers starting behind or right near their own 20-yard line.

Steelers special teams blocked a punt that became a fumble when Jaylen Samuels touched the ball beyond the line of scrimmage. Jordan Dangerfield recovered the ball. Switzer had a 9-yard return that was marred by a penalty. Earlier the Steelers were penalized on a fair catch.

The Steelers were called for three straight offsides on the final field goal. Joe Haden called on the first miss. Artie Burns called for the one he blocked and on the final kick that was declined. Looked to me like the long snapper was spinning the ball to draw at least one of the offsides. I believe this game should have gone to overtime. Someone will get some film to see if the Steelers were drawn offside. Haden’s looked close to me.

Oh, and Chris Boswell missed yet another PAT. The only kicker with more misses in 2018 is former Chargers Caleb Sturgis who has six misses to Boz’s five.

Nolrog had the top comment among the 1182 1st half comments. “How do you miss that false start unless you did it intentionally? That was really blatant, and the result was a TD. Just a horrible missed call.”

Landry Byrd liked James Conner running the ball at the goal line, “Maybe should have dialed up that play from the goal line last week hmm…” Nathanael Dory liked the defense, “I can’t be more proud for the defense. Woowww” While John Noh admired Ben’s pass to AB, “That might have been the best deep ball Ben has thrown all year.”

But before the kickoff, I let my nerves show: “Ready. I’m scairt about this game but ready.”

Steelers Depot respondents met the standard in the 2nd half with 1429 comments.

Unsurprisingly, top comments addressed the officiating. The GrumpyHighlander led the way with “False start missed. Phantom hold on Foster. Block in the back no call.
I don’t normally complain about refs, but this is insanely horrible.” Nunya added that “Officials might want to make it a tad less obvious they want to keep the game close…”

When Switzer was concussed with the helmet to helmet Alevin16 was “surprised they did not call that on us for allowing a head to head hit.”

Dan looked at the bright side, “Before we fire everyone, bear in mind that LA was gifted 2 TDs from a missed false start and block in the back. That’s a tough momentum swing to come back from. Let’s see if 7 has some magic left.” Steeler D responded “If only it was those 2 plays. We got jobbed on a half dozen.”

Bottom line is this Steelers team not good enough to overcome biased refereeing.

This was the most atrociously one-sided officiated games that I have seen. To ignore the referee’s impact on this game is not acceptable. NFL officials directly enabled two scores by no calls of penalties that were clear on national television. These were not subjective “ticky-tacky” misses that could be called one way or the other. In one, an offensive tackle moved then took a step back to absorb the rusher before the snap. In another, Brian Allen was pushed from behind preventing a tackle on the punt returner. This was not the hand on the back of the shoulder type play that Pittsburgh was penalized for but a hand in the back and pushed to the ground. A little less clear was the long snapper’s spinning the ball in the three field goal attempts at the end of the game to draw defenders offside.

Still, the adage that “you have to play better than the refs, ref” applies. Ben throwing an interception at the 8-yard line. Boswell missing another PAT. Sean Davis colliding with Joe Haden to inadvertently break up an interception. Artie Burns not challenging a lumbering 38-year old tight end on a two-point conversion. The offense not scoring on their first three drives to open the second half. The defense not stopping the Chargers on their last three drives of the game. Linebackers covering wide receivers. It is not the end yet, but the next four games will determine if this team will be playing in January.

In the 2018 Memorial Day Weekend: Steelers Friday Night Five Questions, I committed to play songs that Steelers Depot respondents suggested might be the new Steelers anthem if Renegade by Styx was ever replaced. Here is entry 33 of 45 from Sdale: Du Hast by Rammstein.