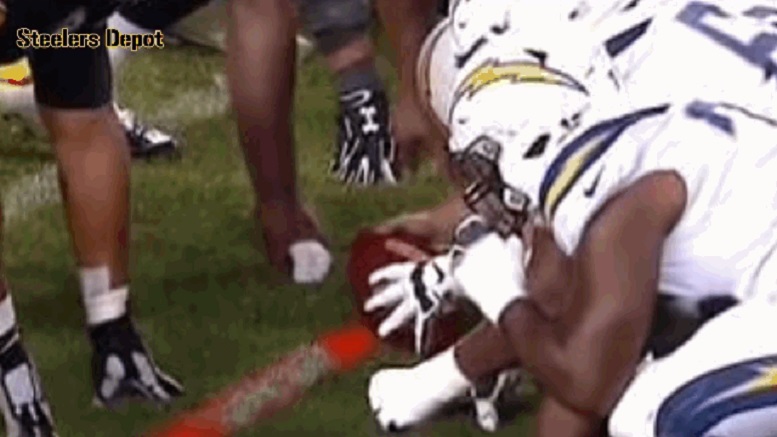 The end of the Pittsburgh Steelers Sunday home loss to the Los Angeles Chargers included kicker Michael Badgley being given three attempts to kick home the game-winning field goal due to defensive offsides being called on the home team. The Steelers being offsides three times in a row however, might have been directly related to how Chargers long snapper Mike Windt likes to twist the football just before sending it back to the holder.

Not long after Sunday’s game was over, Cleveland Browns linebacker Joe Schobert pointed out Windt’s twisting habits on Twitter.

“Chargers long snapper is notorious for twitching and moving the ball before he snaps. Pointed it out to refs during our game and was told ‘he’s been doing it his whole career’ it’s not gonna get called,” Schobert tweeted.

Chargers long snapper is notorious for twitching and moving the ball before he snaps. Pointed it out to refs during our game and was told “he’s been doing it his whole career” it’s not gonna get called. https://t.co/wZTFRJxTx3

As you can see in the two gifs below that are from the second field goal attempt by Badgley that was ultimately blocked by Steelers cornerback Artie Burns, there is indeed some twisting of the football going on pre-snap.

Come on baby, let's do the twist. #Steelers #Chargers pic.twitter.com/J1GbuTVGsn

Here is the EZ view and zoom in of long snapper on the Burns offsides block. He's really massaging his ball. #Steelers pic.twitter.com/0cqLT0bTZ7

During a Tuesday morning interview on DVE Radio, former NFL referee Gene Steratore, who is now a rules analyst for CBS Sports, was asked about there being potential illegal snaps by Windt on Sunday and he agreed that there was some degree of movement when he reviewed the tape.

“But there is some movement of that football,” Steratore admitted. “Whether it’s herky-jerky movement more than the normal, there are centers in the league that are well renowned for those little nuances right before snapping. Those are people we usually talk to you before the game. I actually talked to all the centers before the game, or the umpire always did. I do know that.”

Steratore was quickly asked if Windt is one of those long snappers in the NFL known for having those little nuances.

“Yes, yeah, yes, that he’s known to do a little bit of that adjustment,” Steratore said. “I would say this to you, probably 65 percent, 70 percent of centers have a little something in there. Most times it is just the adjustment because the way that ball gets snapped. You know, these guys are shooting that football back there pretty fast, so there always seems to be some movement right prior to them getting themselves set to snap a punt or a field goal, you know? But yeah, he is one of the guys that would be talked to and as I said, that’s not unusual to talk to them.”

While there’s no sense crying over the potential snap violations Sunday night by Windt, it will be interesting to see if he is flagged for it in the coming weeks now that his little nuances have been brought to the forefront.

Even if Windt had been flagged for a snap infraction on any of those three field goal attempts Sunday night, such an infraction is considered a dead-ball foul and a 5-yard penalty is then assessed. In short, none of those blocked attempts or first miss would have counted as they would have happened after the play was deemed dead.

To what extent are long snappers allowed to move the football after they are set?

“And if it’s a normal kind of adjustment, as you said, and we’re setting the ball and it kind of rolls in my hand for a minute, I can do that and I can actually even do that prior to stopping and then getting set. The reason for that is, is because we do try to put the laces on the right side and some centers like the laces, dah, dah, dah. But once that ball starts to make that movement to begin to snap, it has to stay one continuous motion.”