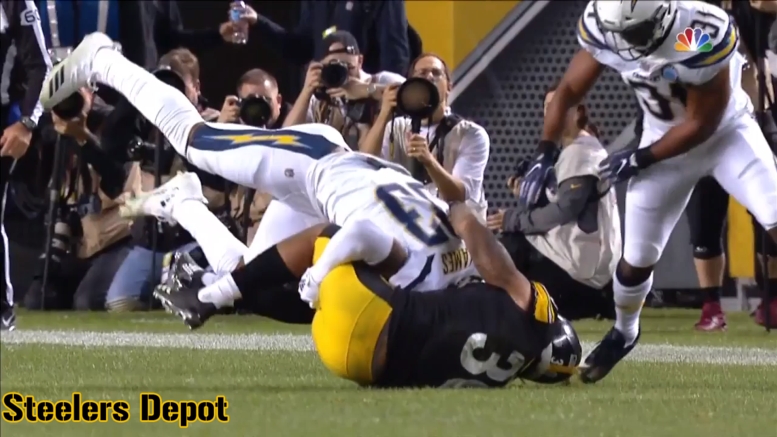 Sometimes a player on the opposing side of the football has a big enough impact on the game that you want to take a deeper look at how he did. I only do this maybe once or twice a year, but today I’m going to be looking at Los Angeles Chargers defensive back Derwin James and how he affected the Pittsburgh Steelers in the first half of Sunday’s game and kept it close enough to allow them to come back in the second half.

The first play of note didn’t have a long-lasting impact, admittedly, but it shows the kind of talent he is. About 10 minutes into the game, the Steelers had a first and goal from the one-yard line following a defensive pass interference penalty. James came in from the left side of the defense and chased down James Conner from behind to hold him for no gain, or even a short loss.

They would score on the next play, but as the Steelers drove to just outside of the red zone on their next possession, it was James who stopped the bleeding. First, on second and 10, he perfectly played a swing pass to Conner out into the flat and put him down for no gain with one of the best tackles you’ll see this year.

On the next play, Ben Roethlisberger did him a bit of a favor when he hung up a pass intended for Vance McDonald that he was able to easily intercept. But the rookie defensive back was in great position to make any play in that spot.

Late in the quarter, with the Steelers looking at a third and six, Roethlisberger tried to come back to McDonald, but James was on him again and was able to play the ball from over the top and knock the ball loose for an incompletion, stopping another drive from the Chargers’ 30.

With 33 seconds to play, it looked as though Roethlisberger completed a big play to Antonio Brown at the sideline for 24 yards. The Chargers took a timeout to give the booth time to review the play and determined that the big hit James put on Brown prevented the receiver from getting his second foot inbounds.

Again, as in the first example, this was only a temporary relief, as the drive would ultimately end with a 28-yard touchdown to Brown, but he was instrumental in stopping the offense on two other drives that entered field goal range in the first half. He only recorded one tackle in the second half, but even that was a good one, coming off a blocker to make a tackle on a screen pass.