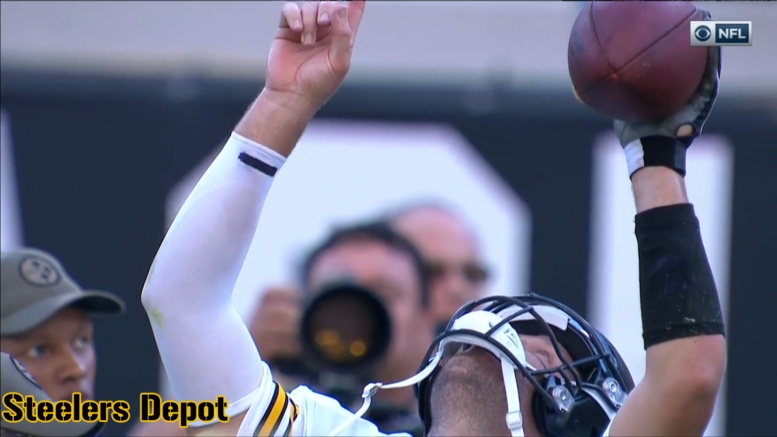 The best season of Pittsburgh Steelers quarterback Ben Roethlisberger’s career was in 2014, the year the team set their current points record for a season. His 2018 season is looking very much like that year in many ways, albeit with one key difference, and that is throwing interceptions.

Still, that is in-line with where he has been in recent years. He had nearly identical rates in each of the previous two seasons, and had a rate as high as 3.4 percent in 2015, which was a huge down year in which he only threw 21 touchdowns, missing four games.

But he is on-pace to break some of his own notable franchise records, including the achievement of the first 5000-yard passing season in Steelers history. He is sitting at 4462 yards now after 14 games, after throwing for at least 250 or more yards in each of his first 13. He tied for the league lead in 2014 with Drew Brees when he threw for 4952 yards.

He also has 30 touchdown passes and has had at least one touchdown in every game—more than one in nine of them. His career-high and the franchise record, which he has done twice, is 32, the mark that he most recently his in 2014. Assuming he plays in the season finale, chances are he breaks both records.

This has all been a part of the most prolific passing offense in Steelers history, and one of the best passing attacks in the NFL in 2018. Only Patrick Mahomes has thrown for more yards (4543), and just five quarterbacks have thrown more than his 30 touchdowns, with three of those five only having thrown one more touchdown.

The Steelers have already faced two of those five quarterbacks so far this season and will face a third next week in Brees. In fact, Pittsburgh will have faced five of the top 10 quarterbacks by next week in terms of touchdowns thrown, so Roethlisberger has had plenty of motivation to get his competitive juices flowing.

Earlier this year, Roethlisberger chose to embrace the term ‘gunslinger’ and the mentality that comes with it. This season perhaps more than any other in his career seems to exemplify that as he approaches a career-high in touchdowns and interceptions (the latter with the exception of the freakish outlier of 2006).