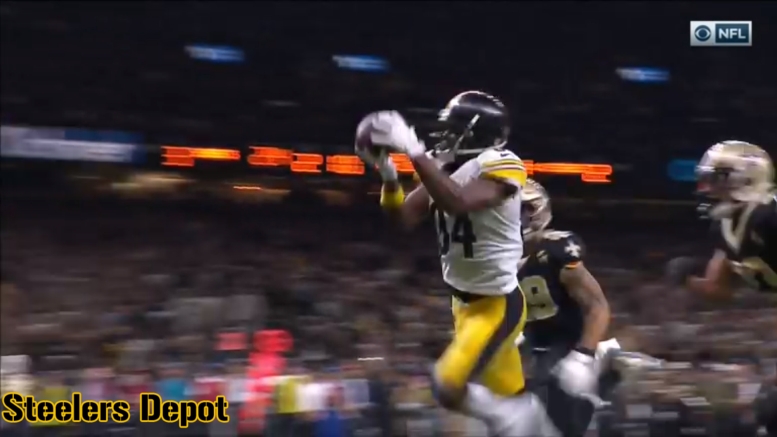 Single-season milestones tend to come toward the end of the year for obvious reasons, but with the Pittsburgh Steelers losing most of the time in the second half of the 2018 season, it’s become more difficult to gauge when it’s best to discuss these milestones, since people generally don’t want to hear about records in the aftermath of a loss. So I try to wait a day.

Well, I’ve waited. So now I’m going to talk about Antonio Brown and the remarkable 2018 regular season he’s had, particularly in the most crucial aspect of the game: scoring points. With two touchdown receptions yesterday against the New Orleans Saints, Brown broke his own record for the most receiving touchdowns in a single season in franchise history.

He now has 15 on the season, which is the most in the NFL. Should that hold up, he would become just the second Steelers player in NFL history to lead the league in receiving touchdowns for a season. Lynn Swann previously did that back in 1975 with 11 touchdowns.

According to my research via Pro Football Reference, Brown is also just the sixth player in NFL history, with the seventh occurrence, to catch 15 or more touchdown receptions in a single season at the age of 30 or older.

He now has 74 touchdowns in his career, with 59 of them coming over just the past five seasons. If he can add one more to his total in the season finale, he will have averaged 12 touchdown receptions per season over a five-year span.

Within that range, he recorded at least 10 touchdowns every year with the exception of 2017, which was a truncated campaign after he suffered a high ankle sprain in the second quarter of the Steelers’ 14th game. The odds would have favored him adding at least one more score over the final 10 quarters had he been able to play.

I’ll expand on this later, but in this game he also surpassed Wes Welker for the most receptions in any six-season span in NFL history, and extended his own record for the most consecutive 100-reception seasons. He caught 14 passes against the New Orleans Saints to push him up to 104 on the year.

He also caught those 14 passes for a season-high 185 yards, vaulting his yardage total up to 1297. With three more yards, he will top 1300 receiving yards for the fifth time.

In non-Brown Steelers seasons, his 1297 would be the sixth-most all-time—actually seventh-most, because JuJu Smith-Schuster added 115 to his total yesterday as well to bring him up to 1389—the third-most in a Steelers season by anyone other than Brown. He needs just 10 yards to pass all other non-Brown players.