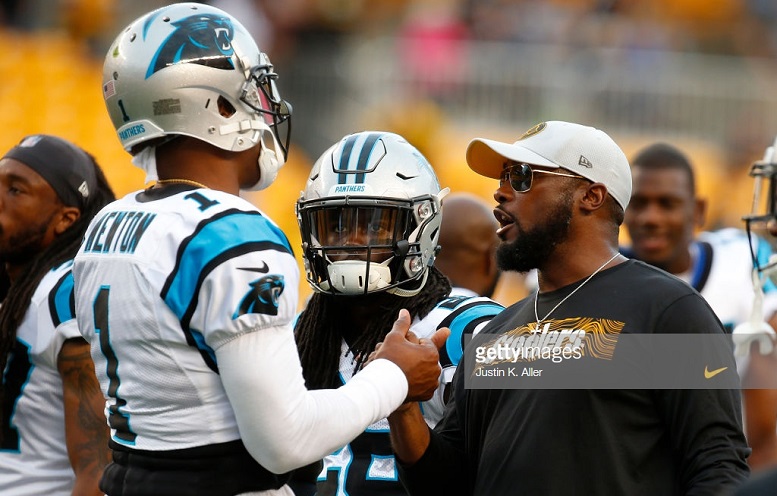 Thanks to them having to play on Thursday night this week, the Pittsburgh Steelers won’t have a lot of time to practice and prepare for their Week 10 opponent, the Carolina Panthers. To make matters even worse, that means less time to prepare to play an offense that features a dual threat quarterback in Cam Newton, who has played very well so far this season.

Not only is Newton performing well so far as a passer, as evidenced by him completing 67.3% of his 263 total pass attempts for 1,893 yards and 15 touchdowns with just 4 interceptions, he’s also rushed for another 342 yards and 4 touchdowns on 73 total attempts with a long gain of 29 yards. That means he’s running with the football an average of 9 times a game. Because of that, Steelers head coach Mike Tomlin was asked during his Monday press conference if a lot of Newton’s runs so far this season have been by design.

So, just how many designed runs has Newton had so far this season? After going through the tape of the Panthers first 8 games of the season it looked like 19 of Newton’s runs so far this season were quarterback scrambles that went for 138 yards. Newton has also had 11 kneel-downs to date and also seemingly had 3 quarterback sneaks in total and those of course included him being under center. If you total those plays up, you get 33 so that still leaves roughly 40 other runs of Newton’s to account for over a span of 8 games.

Obviously, a lot of those designed runs for Newton are related to read-option plays but we’ve also seen him do some naked bootlegs off power run disguises again this season as well. Just ask the Baltimore Ravens about the Newton naked bootleg ability as that’s how he scored against them in the fourth quarter a few weeks ago.

Newton typically runs the bootleg out of a heavy formation and in short-yardage distances but as I noticed in the Panthers game against the Cincinnati Bengals earlier this season, he’s also ran the bootleg on a 1st and 10 play, albeit late in the fourth quarter.

What’s so dangerous about that naked bootleg is that Newton and Panthers offensive coordinator Norv Turner usually do a great job of setting it up during games as they will use designed power running game handoffs to running back Christian McCaffrey with Newton carrying out a fake bootleg after giving away the football. That sort of action lulls edge-defenders to sleep. Also, don’t forget about Newton being able to sneak a tight end across the field for him to throw to on one of these boots and I bet we see the Panthers try that at least once Thursday night.

Speaking of McCaffrey, his deeper infusion into the weekly offensive game plans by Turner this season really seems to have made Newton an even better quarterback and Tomlin noted that during his Monday press conference.

“But I really think what’s going on with him [Newton] is just looking at the infusion of roles between what he and [Christian] McCaffrey are able to do, when you talk about talented players, multidimensional players that really perform really well together,” Tomlin said. “McCaffrey’s playing more snaps I think than any other offensive player in football. He leads them in receptions, he’s a rushing threat. Obviously, as is Cam Newton. The way that those two guys operate and the things that Norv Turner is able to do with those two guys is really creating issues for their opponents and particularly of late.”

So, what’s the best way to prepare for Newton on a short week and ultimately make him more one-dimensional come Thursday night? For starters, you can bet backup Steelers quarterback Joshua Dobbs will run the scout team these next two days to give the team’s defense as many looks at what Newton and the Panthers offense does best from an athletic player perspective. Dobbs will be asked to show the Steelers defense a lot of different read-option looks in addition to various power run plays with bootleg action added in for good measure.

All that practice preparation aside, the Steelers best defense against Newton’s athletic ability come Thursday night be their own offense. If Steelers quarterback Ben Roethlisberger and the rest of the offense cash in a few early possessions for touchdowns, perhaps Newton will have to throw the football more as the game goes on.

Additionally, the Steelers red zone defense is likely to be really tested Thursday night as I fully expect the Panthers offense to be able to move the football down the field against that unit. If the Steelers defense can make the Panthers offense settle for a bunch of red zone field goals in the first half of the Thursday night affair, that might be enough to win the game.

Containing Newton Thursday night will be a unique chore for the Steelers defense and hopefully some of the preparation they did recently for Ravens backup quarterback Lamar Jackson will come into play at Heinz Field even though Baltimore really didn’t use their first-round draft pick a lot this past weekend.

“I don’t need to give him advice. He’s Superman,” Roethlisberger said of Newton on Wednesday. “Like Superman, he’s pretty spectacular.”