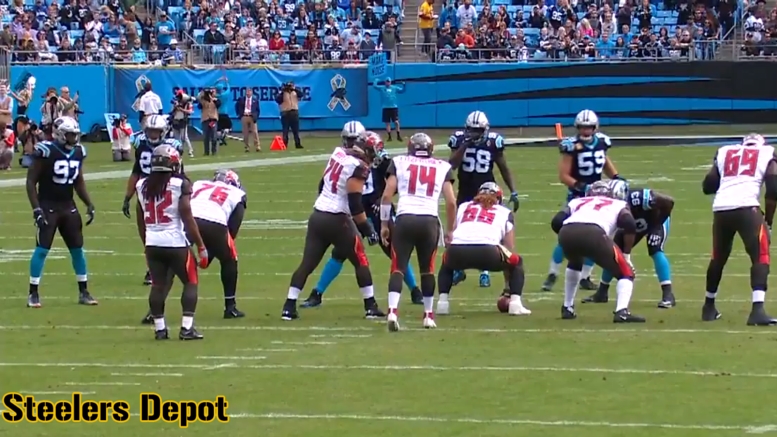 There was a time at with the Pittsburgh Steelers were regarded as the gold standard for the linebacker position, whether it was on the inside or on the outside, in a 3-4 scheme or a 4-3. Right now, they are just hoping that second-year T.J. Watt can really develop into their next great player at the position, after Ryan Shazier’s injury a year ago.

When the Steelers host the Carolina Panthers tomorrow night, however, they will be facing a duo at inside linebacker that Head Coach Mike Tomlin couldn’t say enough about on Monday during his pre-game press conference: the Pro Bowl pairing of Luke Kuechly and Thomas Davis.

“They’ve got continuity, and when you’re talking about continuity, man, you’re talking about 59 and 58 at the linebacker level”, Tomlin started in breaking down the Panthers’ defense. “I’ve spent the large majority of last night studying those guys, and that’s as formidable a tandem at the linebacker position in a 4-3 scheme since [Brian Urlacher and Lance Briggs of the Chicago Bears] in the mid-2000s, in my opinion”.

That is some heady praise. Urlacher is a recently-anointed Hall of Famer, and Briggs was long the Robin to his Batman, still making seven Pro Bowls in his own right, and three All-Pro nods, one first-team. Luechly has made the Pro Bowl every year since his second season with first All-Pro nods and was the Defensive Player of the Year in 2013 after being the Defensive Rookie of the Year in 2012. Davis had an injury-riddled beginning, but has been to the Pro Bowl in three straight seasons with two All-Pro nods as well. He is one of four active players with over 1000  career tackles.

“Just to look at the totality of their work over the course of their careers and just to look at how they’re playing here in 2018, I’ve got a lot of respect for Luke Kuechly and Thomas Davis”, Tomlin continued to share his thoughts on the Panthers’ dynamic duo. “They’re quality players at all levels. They’re both very good against the run. they’re both very good in coverage, be it zone or man coverage. They both are very good blitzers”.

He also praised their communications abilities, born on by their long history together. “They’re traffic cops. They’re aware, they got others lined up”, he said. “Man, they’re special. I don’t spend a lot of time focusing on those guys because they’re an NFC team, but to prepare for them and watch those two guys work and really contemplate the totality of their careers, individually and collectively, I thought it was appropriate to start there”.

Hopefully the Steelers’ offensive line doesn’t spend too much time on the field admiring the impressive linebackers that it prevents them from delivering a pancake block at the second level to help spring James Conner for a league-leading ninth explosive run on the season.