We’ll find out for sure on Tuesday if Pittsburgh Steelers running back Le’Veon Bell will sit out the remainder of the 2018 regular season. In the meantime, however, several Twitter users have noted that the running back has now dissociated himself with the Steelers on a few of his social media accounts.

I just noticed that @LeVeonBell changed his twitter info to " All Pro NFL Running Back". It had previously been "Running Back, Pittsburgh Steelers" until yesterday…@MatthewBerryTMR @AdamSchefter @RapSheet @espn pic.twitter.com/awTwwTQoDU

As you can see in the before and after screen shots below, Bell no longer has the Pittsburgh Steelers listed in his Twitter bio. He now only goes by All-Pro NFL Running Back. These changes were made since he returned to Pittsburgh from Miami earlier this week. 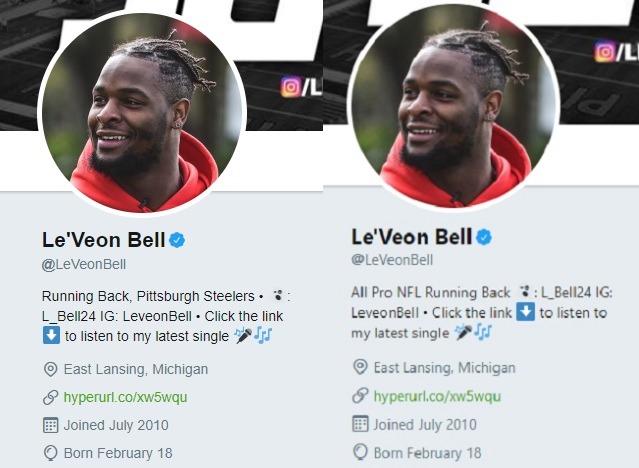 Should Bell not show up and sign his franchise tag tender by Tuesday at 4 p.m. EST, he must then sit out the remainder of the season per NFL rules. Should that happen, discussions about what his potential franchise and transition tag amounts for 2019 will actually begin to ramp up even more being as he will have sat out an entire season, his second one as franchise tagged player.

Bell, who played under the franchise tag in 2017, was tagged this year at an amount of $14.544 million. Every week he has failed to report this season has resulted in him forfeiting just over $850,000

“I’m not apologizing for what I believe is right for myself, family and the rest of my peers, period,” Bell wrote. “Also if you’re really finding the time to figure out what I’m saying, you’ve proved my point.”

“Just about everybody has an opinion on my life and worried about what I’m doing… don’t judge me off my decisions because maybe this isn’t what you’d do,” Bell also wrote. “But most people don’t take the time to just simply read between the lines … and that’s clearly on them.”

Bell’s actions and decisions so far this season have been very hard to predict and find reason with. Tuesday will at least bring some closure to what his 2018 status will be. If he fails to report and sign his tender by Tuesday, it will then be interesting to see how his 2019 free agency status plays out. In short, we might have a lot more reading between the lines to do when it comes to Bell over the course of the next several months and that includes the language in the CBA.