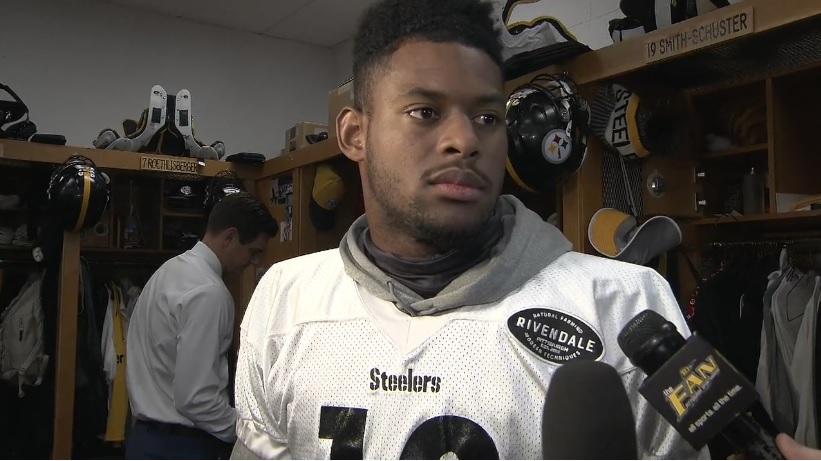 JuJu Smith-Schuster is just 22 and a loooooong ways away from retirement. But he hopes to play his under career in a Pittsburgh Steelers uniform. That’s what he apparently told reporters to tweet out at the end of his interview today, according to ESPN’s Jeremy Fowler.

JuJu Smith-Schuster: I want to retire a Steeler.

Smith-Schuster ended his interview with this line and said to tweet it out. https://t.co/4e5HQpn4Vz

A sentiment I’m sure every Steelers’ fan would agree with. He’s been nothing short of a sensation through his first two years, setting the record for most receptions and yards by a player before turning 22. This year, he’s still the team leader in receptions and yards and catching a higher percentage of his targets than Antonio Brown, 70% to 58%.

As we’ve recently written about, Pittsburgh has begun to move him to the outside “Z” spot and sliding Ryan Switzer to the slot. Ben Roethlisberger’s recent comments speak to the level of trust he has in the young receiver, saying he wanted to throw it to Smith-Schuster on all four goal line plays in Sunday’s loss to Denver.

He’s become a star on and off the field, a personality the city has embraced and allowed JuJu to become a household name across the country. His Youtube channel has over 600,000 subscribers (and his dog is verified on Instagram with a 168K following). Not to go all Darren Rovell powertweet on you but Smith-Schuster has partnered with multiple companies and starred in commercials that honestly, probably earn him more money than the $655,000 he’s making in base salary with the Steelers.

Last week, Mike Tomlin compared Hines Ward to JuJu for their physicality and blocking ability. Smith-Schuster might end up being compared in another way – a receiver who never left the Steelers, joining Ward, Lynn Swann, John Stallworth, and presumably, AB.