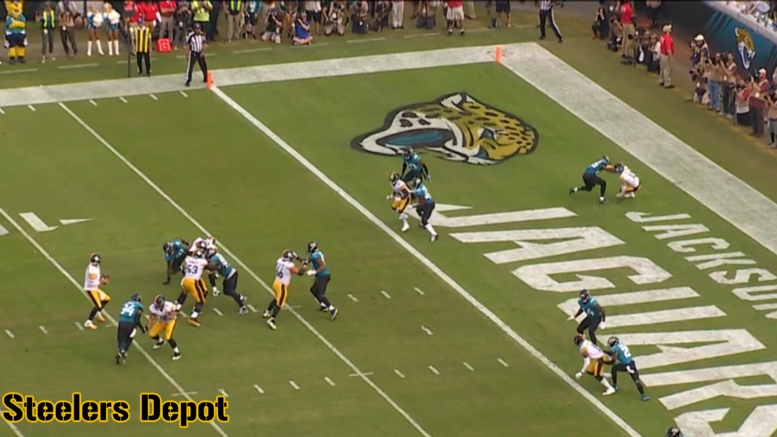 There were so many moments in yesterday’s game in which it looked as though the result could turn in another direction, but perhaps none were as heart-stopping as when Pittsburgh Steelers quarterback Ben Roethlisberger seemed to throw a game-ending interception from the one-yard line to D.J. Hayden in a three-point game with just seconds remaining.

It was an extended play on which Roethlisberger bought himself extra time to throw, and ultimately looked in the direction of Ryan Switzer, who ended up on the ground at the end of the play. Fortunately for the Steelers, it was because Hayden had yanked at the wide receiver’s helmet, drawing a penalty that negated the potential crushing turnover.

Switzer likely wasn’t one of the primary targets on the play, but Roethlisberger looked his way for one simple reason: it looked like he was flashing open. “He won”, the quarterback said after the game, referring to his one-on-one matchup with Hayden in the back of the end zone.

“He was going to win. I think that’s why he got grabbed because the defender knew”, he went on. “It’s kind of one of those ones where you know you’re getting beaten, you take the penalty to avoid the touchdown. Yeah, I saw it the whole way. He was running and he got grabbed and that’s the reason the guy made the play”.

Still, it was a nerve-wracking moment as the officials deliberated for what felt like several minutes for those emotionally invested in the outcome of the decision. They ultimately elected to call the penalty, which not only wiped away the interception, but put the ball at the half-yard line.

It was particularly galling because Roethlisberger had already thrown an interception in the red zone earlier in the game, with Jalen Ramsey picking him off by getting in front of a pass intended for Antonio Brown that should have been led further upfield.

It also called back to the end of the loss to the New England Patriots in December last year, Roethlisberger throwing an interception following an evident go-ahead touchdown that was negated by a rule that no longer exists in its previous form.

It just serves as a reminder about how close a game can be from going a different way. That’s never more evident when such a crucial swing of outcome occurs literally within the final seconds of the game and shifts from the game-ending play to setting up the opportunity to reverse the fortunes of the team that would have been on the losing end.