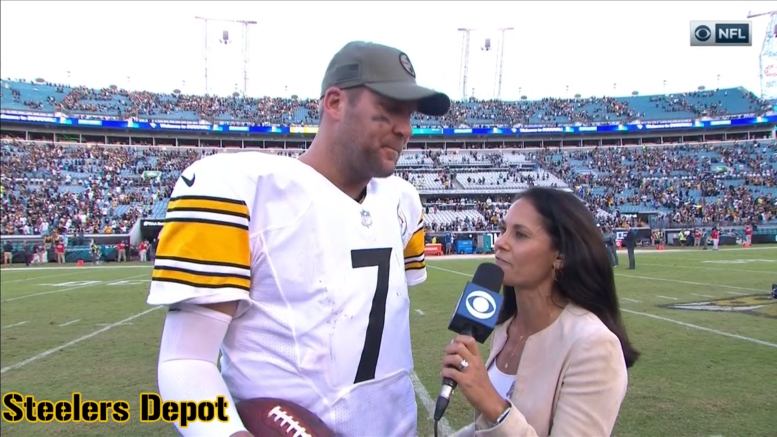 There are just some occasions where Ben Roethlisberger looks so bad that it defies explanation. And that has often come against the Jacksonville Jaguars. While this particular incarnation of the Jaguars defense does a lot of things that are very good, the quarterback’s performance in many instances today can only be chalked up to his own failures.

That’s a lot easier to talk about after he scores three touchdowns in the final 17 minutes of the game, including one that he kept for himself for the go-ahead score. But he still threw three interceptions in the game, and even had another two that were called back due to penalties, while missing reads or going to them a lot later than he should have.

I wanted to assume that Roethlisberger had gotten all the yips out of his system, but today’s game—even after giving credit where it is due to the Jaguars’ defense, which played great for the vast majority of the game—showed that there is still some ugly football remaining.

The thing is, that can be okay it if continues to come with the nearly peerless playmaking ability and instinctual daring that he possesses to make some of the throws that he did, and had to, make today against Jacksonville, including a couple of excellent back-shoulder throws and pinpoint placement on the touchdown to Vance McDonald.

He also bought time with his legs on multiple occasions, and it finally paid off with the 78-yard touchdown to Antonio Brown that finally put the spark of life into an offense that had hardly done anything up to that point in the game.

He would finish the contest completing 27 of 47 pass attempts for 314 yards and two touchdowns (plus a rushing touchdown) and three interceptions, but in a way, his performance was both better and worse than the stat line actually looks.

It didn’t help that the Jaguars shut down the Steelers’ run game while it was still a viable option. James Conner finished with just 25 rushing yards on nine carries, and he dropped two of his nine targets in the passing game, finishing with just 24 receiving yards on six receptions.

The last two drives of the game, though, were some of the best football that we have seen from Roethlisberger in years, which goes to show that you can never count him out. He spent the vast majority of about the first 55 minutes of the game—barring one scramble-drill 78-yard touchdown—looking like anything but a Super Bowl-contending slinger, but when the Steelers were up against the wall, he put the team on his back and carried them across the goal line.