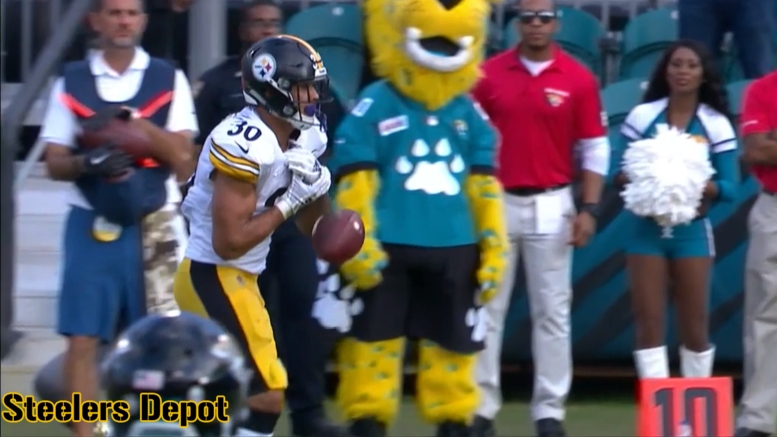 A week after the Pittsburgh Steelers only had three total incomplete passes, and only one of those incompletions were even worthy of discussion as being a potential drop, we unfortunately had a couple of doozies on Sunday against the Jacksonville Jaguars, and as much as it pains me to say it, it was a rough outing for James Conner in that regard.

Before we get to his two big fourth-quarter drops, however, there was a two-play sequence in the middle of the first quarter I want to take a look at that sabotaged an early drive at midfield. The following two plays I both lay the blame for on Ben Roethlisberger, but they’re worth looking at all the same.

From the 46, on second and six, Roethlisberger had JuJu Smith-Schuster wide open for pretty much the entire play on a shallow crosser that it took him forever to actually release. When he did, he threw it behind the receiver, who couldn’t haul it in reaching back behind him. With that said, he probably has to sit in the zone earlier here.

On the next play, looking at third and six, Roethlisberger tried to get the ball to Vance McDonald to the left flat coming out of the slot, but his pass led the tight end too far. It was a poor angle in the throw even if McDonald got his hands on it, so I can’t call it a drop.

the only reason that the magnitude of Conner’s drops in the fourth quarter can be overstated is simply because of the mere fact that they were able to overcome them and win. Had they not scored with five seconds to go, these two drops would have been a big reason why.

The first came on fourth and six from the Jaguars’ 43 with just under seven to play in a 16-6 game. Conner ran a wheel route out of the backfield and Roethlisberger put the ball on his hands, but it bounced right off of them and out of bounds, resulting in a turnover on downs.

The second drop came with a minute to go on second down from the Jaguars’ 27. After Roethlisberger bought time by escaping pressure, the back made a great read to head downfield, getting behind the athletic Telvin Smith.

But once again, Roethlisberger placed the ball right in his hands, and it ended up on the ground. The replay here clearly shows that he went to turn and run before he had control. There’s no question this would have been a touchdown, because there was nobody in front of him.

That set the Steelers up with a third and 10 (though admittedly they were already in field goal range), on which Roethlisberger would convert on a 25-yard pick slant to Antonio Brown, so as they say, all’s well that ends well. And I’m sure nobody is as eager to get back out on the field as is Conner to erase that last image of him.