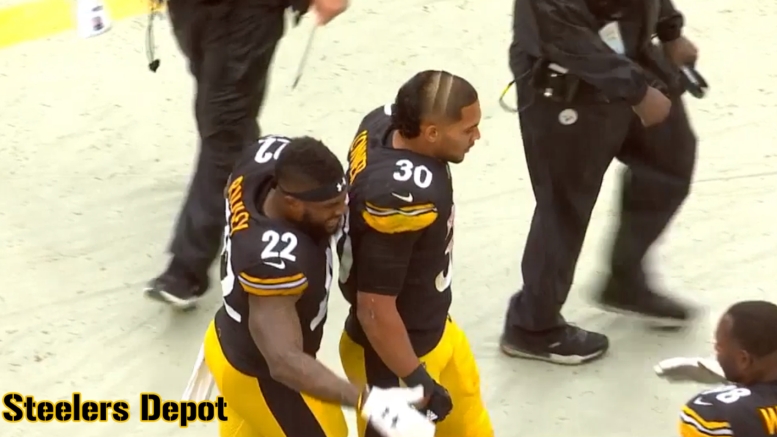 Question: Can the Steelers’ backup running backs tow the load for a few games if something were to happen to James Conner?

This is one of the key questions—or at least key hypotheticals—facing the Steelers over the back half of the season, now that we know with absolute certainly that no cavalry will be coming at the running back position.

The only running backs that will be carrying the ball this year other than James Conner are the ones already on the roster: Stevan Ridley and Jaylen Samuels. If something happens to Conner that causes him to miss a meaningful amount of time, do those two backs combined offer enough to keep the offense going?

I’m personally inclined to say yes. While Conner has been great this season in producing his own offense, I think that Ridley is also capable of breaking tackles in the run game, and based on the last contest, it seems that Samuels is becoming the receiving back of the two.

We got a brief cameo of him in pass protection and we already know that he was an accomplished receiving threat at the college level. With Ridley and Samuels combined, they may not amount to Conner on his own, but behind the best offensive line in football and talent all around them, the offense should not struggle for a brief stretch.

One area that might prove a downturn though is in the red zone, where Conner has been very good this year, with I believe eight of his 10 rushing touchdowns being in goal-to-go situations, or at least within the 10-yard line. I believe they’ve only failed to score on one goal-to-go situation this year in which he has gotten at least one carry.

Another issue could be telegraphing the play based on personnel. If Ridley and Samuels are used in more defined roles, the defensive keys get a lot easier. And Ridley has had issues in the passing game, including a drop and a fumble, as well as a bad route.