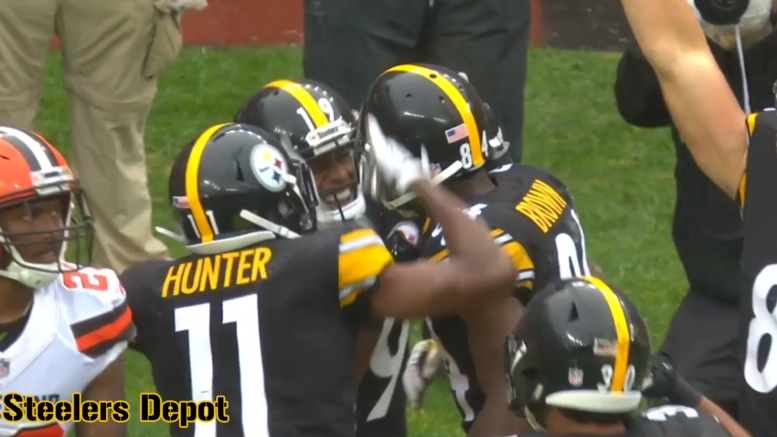 Not so, at least for the moment, according to Pro Football Focus, which ranked the wide receivers of every team through the first four weeks and placed the Steelers’ group outside of the top 10. Ranked behind teams such as the Cincinnati Bengals, the New York Giants, and the Miami Dolphins, Pittsburgh’s group finishes at this point of the season tied for 13th with the Denver Broncos.

Writes David Neumann, “it’s been an uncharacteristic start to the season for the perennially great Antonio Brown. Through Week 4, Brown’s 70.3 overall grade, while still good, would comfortably be the worst of his career in the unlikely event it sticks around for the entire season”.

At the moment, Brown has 29 catches on 53 targets for 273 yards and three touchdowns. The yardage total isn’t even close to the top 10, though his three touchdowns rank tied for sixth with about 17 other players. His 29 receptions has him tied for ninth, behind teammate JuJu Smith-Schuster.

“That slow start is enough to push the Steelers further down this list than expected, even though JuJu Smith-Schuster continues to be a problem for defenses in the slot, where he’s gained a league-high 340 yards”, Neumann continued.

He didn’t make any mention of James Washington or Ryan Switzer, though in fairness neither of them have particularly done much yet to merit a discussion. This right now is pretty much a two-receiver team, with the vacant third position just waiting for Washington to grab hold of it for himself.

I do find myself unable to stop wondering how this ranking would be different if quarterback Ben Roethlisberger had been better to date. His accuracy, especially on deep passes and when targeting Brown, has really gone awry.

We know that the talent is in the group, and if the list were based purely on that, the Steelers would probably be ranked much higher. But they haven’t really put up the numbers that justify it. And it doesn’t help, either, that they have only managed to win one game.

Other positions have been contributing as well. They have already gotten two 100-yard games from the tight end position, and running back James Conner has been doing his best Le’Veon Bell impression in terms of catching the football.