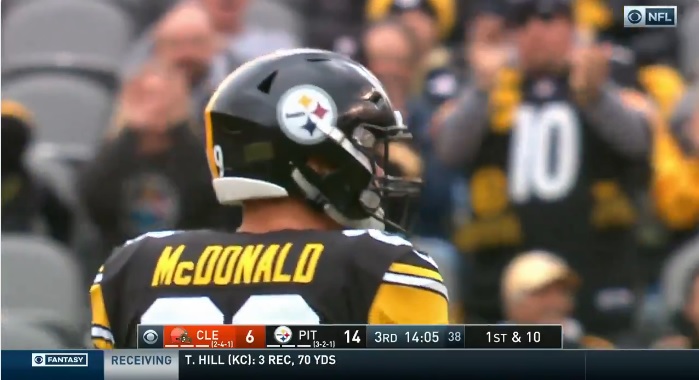 It wasn’t pretty early on, but the Pittsburgh Steelers turned it on late on both sides of the ball, pulling away in dominating fashion for a key 33-18 win over the Cleveland Browns Sunday afternoon at Heinz Field in AFC North play.

The Steelers found themselves in a 6-0 hole that could have been 9-0 if Greg Joseph knew how to hit kicks, but Ben Roethlisberger, James Conner, Antonio Brown and the rest of the Steelers offense woke up just in time, pairing with a rebound performance defensively to roll to the 15-point win.

As I do every week, I’ll take a look at each positional group and hand out grades from Sunday’s big win at home.

It started out ugly for Roethlisberger, who threw a dreadful interception on the Steelers’ second drive of the game, and really didn’t push the ball down the field early on.

A 15-yard pass down the left sideline to Brown on the third drive of the game got Roethlisberger going, helping the veteran signal caller finish 24-for-36 for 257 yards, two touchdowns and one interception in the win.

Roethlisberger didn’t hold onto the ball too long in the pocket trying to make plays like he did in Week 1, and really spread the ball all over, hitting seven different receivers on the afternoon.

His 43-yard touchdown to Brown after stepping up in the pocket to buy time was vintage Ben, and he heated up in the second quarter with strong, accurate strikes to Vance McDonald and JuJu Smith-Schuster, moving the chains with consistency as the Steelers got rolling.

James Conner is playing at an elite level right now. Can we please stop talking about Le’Veon Bell now? Conner is doing just about everything Bell did, and he’s doing it at a better level right now too.

By rushing for 146 yards and two touchdowns, adding five receptions for 66 yards, Conner recorded his third 100+ rushing yards and 50+ receiving yards game of the season. Bell did it just one time last season.

Conner not only forces defenders to miss, he runs through them as well. Sunday’s performance against the Browns was a classic case of a power back wearing down a front seven throughout the afternoon. By the time the fourth quarter rolled around, the Browns looked ready to quit when Conner had the rock.

He did have a fumble in the first half, but was fortunate to get it back. It was Conner’s third fumble of the season. If there’s one area that you can nitpick at Conner’s game, it’s that.

Stevan Ridley had a big fumble on a catch in the third quarter and ended up seeing the bench after that, leading to a good opportunity for Jaylen Samuels to get work in a regular season game.

Samuels responded by rushing for 17 yards on four carries, helping the Steelers chew up clock in the fourth quarter on the way to the win.

Brown went off for six receptions, 74 yards and two touchdowns, adding a drawn holding call on the afternoon, making for a strong day for the best receiver in football, Adam Thielen stans be damned.

However, it was a quiet afternoon for Smith-Schuster, who recorded four catches for 33 yards on six targets. Smith-Schuster had a great back-shoulder catch down the right sideline for 19 yards, and hauled in a 2-yard catch near the goal line to set up Brown’s 1-yard score right before the half.

Justin Hunter got a hat over James Washington and really didn’t do much, hauling in two passes for 15 yards on four targets. Roethlisberger went to bat for him and got him on the field, but he didn’t do much with his limited opportunities and seemed to give up on a seam route in the end zone late in the game, trying to draw a pass interference, rather than going up to get the ball for the score.

Ryan Switzer had two targets and dropped one over the middle, making for a bad day for the slot receiver, especially on special teams. More on that later.

Overall, the group was strong on a day that they weren’t really needed.

McDonald had a good day as a receiver, hauling in three passes for 47 yards on the afternoon, including a key 22-yard rumble that saw him run over Cleveland’s Derrick Kindred in the middle of the field.

McDonald wasn’t targeted much on the afternoon, but he was a very good run blocker for the Steelers, opening up holes for Conner all afternoon.

Jesse James had two catches for nine yards, rarely making much noise as a receiver. Much like McDonald though, James had a big impact as a blocker, getting to the second level on linebackers to help spring Conner.

Xavier Grimble had an early penalty for an illegal block above the waist that forced the Steelers to punt. He wasn’t really seen after that.

The best offensive line in football showed up in a big, big way Sunday at Heinz Field. It wasn’t pretty early on, as Myles Garrett beat Alejandro Villanueva off left tackle for a sack on Roethlisberger, but after that Ben wasn’t touched dropping back to pass.

Add in the fact that the Steelers rushed for 168 yards and two touchdowns on 31 carries (5.4 yards per carry), it’s pretty clear just how dominate the Steelers offensive line was.

Along with Conner’s tough running, the offensive line beat up the Browns front seven, wearing down Cleveland in the second half. What a terrific performance by the Steelers up front.

Villanueva simply shut down Garrett, and had a number of key blocks in the second half to spring Conner off the left side. He’s a top 10 left tackle in football. It’s time he starts getting the credit he deserves.

Special hat tip to Matt Feiler too. He was very good on Sunday at right tackle, rarely giving up pressures off the right side to Genard Avery and Anthony Zettel, while also pulling with power to his left to help Conner grind out the win in the fourth quarter.

It didn’t start out well for the men up front in the trenches, but the Steelers’ defensive line buckled down against Nick Chubb, holding the explosive rookie to just 3.6 yards per carry.

Along with second-half dominance against the run, the defensive line turned up the heat rushing the passer.

Stephon Tuitt really dominated the second half, recording seven tackles in the win, including a sack on Baker Mayfield and two other QB hits. Cam Heyward took a bad penalty on a questionable hit to the head on Mayfield, but overall played a strong game for the black and gold, living in the Cleveland backfield despite recording just two tackles.

Dupree lived in the backfield and was a problem for the Browns all afternoon, but he did struggle to finish some plays in the first half against the run. That being said, it was a very encouraging performance from the veteran edge rusher.

On the other side, TJ Watt had a strong game as well, leading the Steelers in tackles with seven, recording a sack and two tackles for loss in the win. Inside, Jon Bostic and Vince Williams had quiet days, recording just eight tackles combined. Bostic was really good against the run, whereas Williams struggled at times on some of Chubb’s big runs, but they cleaned it up when it counted, making the Browns mostly one-dimensional in the second half.

LJ Fort and Anthony Chickillo also played really well in relief of Watt and Bostic. Chickillo had a huge tackle for loss early in the game that helped get the Steeler defense off the field, while Fort came on in passing situations, using his athleticism to help negate Duke Johnson Jr. out of the backfield.

Another week, another strong performance by a maligned positional group.

The Steelers defensive backs had a good game Sunday, led by Joe Haden and Mike Hilton, who continue to lift this defense to new heights with stellar play in the back end.

Haden had a highlight-reel interception down the right sideline, skying high for the interception for Mayfield’s deep ball, while Hilton broke up one pass and finished with four tackles on the afternoon.

With those two healthy, the Steelers can start to scheme things up for opposing offenses, making life hard for quarterbacks. Sunday was a good example of that.

Sean Davis also had a really good day at safety, coming up for five stops on the afternoon. He’s starting to get comfortable in his new position, and really starting to thrive.

Morgan Burnett made his return to the lineup and didn’t record a tackle on the afternoon, but he helped negate David Njoku, who didn’t catch a single pass for Cleveland. That’s as good as it gets.

Terrell Edmunds recorded four tackles and continues to factor into the Steelers scheme, but he was called for pass interference in the end zone, putting the Browns at the 1 yard line. The Browns ended up scoring a few plays later after Edmunds’ penalty on a floater from Mayfield to Antonio Callaway over Coty Sensabaugh, who started in place of Artie Burns.

Sensabaugh was mostly passable on the day up until that play, where he refused to turn his head to find the football, instead latching onto Callaway, who made a slick one-handed catch for the score through the holding call.

In terms of the kicking game, the Steelers were really good, as Chris Boswell drilled a 42-yard field goal and nailed all four extra points.

Jordan Berry had a productive day punting the ball, averaging 44 yards per punt, dropping two inside the 20 yard line, including one at the 4 yard line that led to the Steelers recording a safety.

The Steelers were dreadful on kick coverage and kick return. The Browns opened the game with a long return from Dontrell Hilliard that would have set Cleveland up at midfield. A holding call helped the Steelers out though. Jabrill Peppers averaged 13 yards per punt return when given a chance, which is on the coverage team, not Berry’s punts.

And then you have the disastrous free kick mistake by the Steelers after the safety that gave the Browns the ball deep in Pittsburgh territory, leading to Callaway’s touchdown.

Roosevelt Nix has no right to wave for fair catch there. Ryan Switzer and Antonio Brown are back there for a reason. Nix needs to worry about blocking for those guys, rather than calling for a fair catch.

After that, the mistake was on Switzer. He has to know the rules. Jump on the ball at all costs. Same goes for Danny Smith. Maybe he needs to do a better job teaching these guys the rules when it comes to free kicks because that’s the second mistake on post-safety punts that Switzer has made.