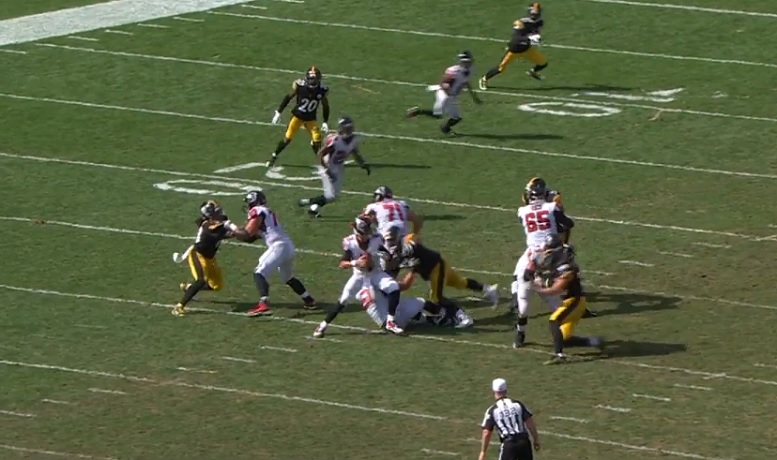 The Pittsburgh Steelers recorded six sacks of Atlanta Falcons quarterback Matt Ryan on Sunday at Heinz Field and being as I’ve received a few emails requesting a breakdown of all six to start the week, I thought I would oblige and do just that on this Wednesday using some all-22 tape as a visual.

It’s not often you see a 3-second, max protection sack on a third down and less than 7 in the NFL but that’s exactly what we saw when Steelers inside linebacker L.J. Fort got to Ryan early in the first quarter On this 3rd and 6 play from the Steelers 38-yard-line, the Falcons max protected on the left with a tight end and running back as two wide receivers ran deep vertical routes that switched at that end out of a three-receiver bunch to the right side of the formation. The Falcons formation and route combination allowed the Steelers to bracket the deep-running receivers with one single-high safety over the top with three others covering underneath. The short out-breaking option that Ryan had was also tightly covered. With the tight end and running back both chasing Steelers outside linebacker Bud Dupree up the field a wide rush lane was created for Fort and cornerback Cameron Sutton to go through being as both had no eligible to cover. Fort easily gets the turtling Ryan. Remember, this was a 3rd and 6 situation, not a 3rd and 16, so the Falcons play selection in this instance was either dubious, or one of the two vertical routes shouldn’t have been run.

On this Falcons RPO (run pass option) gone wrong at the start of the second quarter, a lot of credit should go to Steelers slot cornerback Mike Hilton for his well-timed blitz off the left side of the defense. Hilton’s presence not only draws him attention from the Falcons right tackle, but the running back as well following the play-action fake. While Ryan has a vertical receiver running open down the middle of the field, it’s part of an over route that eventually gets picked up. The slant from the left side also looks to be hampered by Dupree being in the passing lane. In addition to Hilton’s pressure on the left side of the Steelers defense, on the right side of defensive end Cameron Heyward is starting to have his way with the tight end that worked from his left to the right side of the formation as part of a split zone look. Heyward’s pressure forced Ryan to move to his right in the pocket instead of up and forward. Ryan needing to move so much off his mark gave outside linebacker T.J. Watt plenty of time to get an arm over the right guard and beat him for the sack, his first of three in the game.

Watt’s second sack of Ryan came later in the second quarter and on a 1st and 10 play from the Steelers 16-yard-line. On this play, a boot to the left by Ryan off of a play-action fake to running back Devonta Freeman, Watt’s athleticism easily helps him not only beat the  Falcons right tackle up and around the edge, but around Freeman as well. Freeman really should have came off the play-action fake sooner to give him a better shot at slowing down Watt. However, even if he had done so, Watt probably would have easily went right through the running back. With Ryan being right-handed and booting to his left, he has no time to get his body turned to allow himself to make a quick throw to his underneath out-breaking tight end. Watt easily tracks Ryan down from behind for the sack and the Falcons drive stalled two plays later thanks to another sack.

Two plays after Watt recorded his second sack of the game of Ryan, Heyward officially killed the Falcons drive with a sack of his own. On this play, the Steelers only rushed four against five and somehow Heyward is allowed to go one-on-one with Falcons center Alex Mack as the left guard decides not to help to either side of him. Heyward bull-rushes right over Mack for one of the quickest sacks you might see this entire season. Even if Ryan had gotten rid of the football quickly enough, his only two options to his right would have been tackled well short of the chains.

On this third quarter sack of Ryan, we see the Steelers use bracket coverage on their right side while using man on the left behind a slot cornerback blitz by Hilton. The Steelers rush five on this play and inside linebacker Jon Bostic is allowed to join in when the running back stays in the backfield to help pass protect. While the Falcons have the numbers covered on the left side of their formation, the offensive linemen from the center over to the left tackle don’t do a great job of controlling the gaps from A and over. In fact, even Steelers defensive end Stephon Tuitt is able to get some pressure after crossing the face of Mack, the center. The quickly constricted pocket combined with Ryan not having an open pass target right away forces him to step up into the pocket and Bostic easily corrals the quarterback along with Heyward. Bostic, however, was flagged for unnecessary roughness on Ryan as the referee thought he hit the quarterback in the head. Regardless, this play goes in the books as a sack.

A four-man rush combined with strong safety Terrell Edmunds attacking a pass protecting running back in the fourth quarter helped create the Steelers final sack of the game by Watt. Again, the Steelers did a great job in coverage with one single-high safety helping to guard along with man coverage underneath and you’ll notice that Fort has spy duties on Ryan. The inside twist by Tuitt and fellow defensive end Tyson Alualu help constrict the pocket some and a nice speed rush complete with a dip and bend around the left edge by Watt forces Ryan to his left. Ryan’s exit to stage left is too slow, however, and Watt easily gets from behind and strips the football from him in the process. The loose football is finally recovered in the end zone by Fort for a Steelers touchdown.