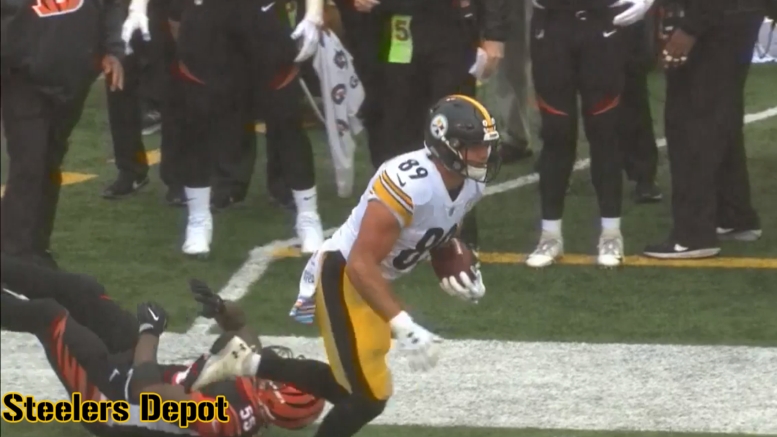 As it turns out, a healthy Vance McDonald is a happy Vance McDonald. The sixth-year tight end has got to be ecstatic about the fact that he has been able to be a significant contributor to the Pittsburgh Steelers’ success so far this year. And his ability to do that must be credited to the team’s patience in working him back from a foot injury that kept him out of the first game of the season.

There are few things that frustrate fans more than a player who routinely deals with injuries, and that has been McDonald’s story throughout his career. Last season was the most frustrating of all, for both sides in the discussion.

Having been traded to the Steelers in late August, he was already going through a transitional period and his offensive contributions would be limited by necessity by the fact that he was still learning the scheme.

The fact that he suffered four separate injuries that kept him out of six full games and long stretches of several others did not help matters. So when McDonald went down early in training camp with a foot injury, the groans and snide remarks came out. He’s soft, fans said. He can’t play through pain. This and that. The same things that were said about Ryan Shazier early in his career as well. And Lawrence Timmons.

It’s much worse to be that player on a new team with a relatively big contract that they had nothing to do with. These new fans don’t even know you. All they know is that you’re damaged goods. Why are we paying you to stand on the sidelines in sweatpants?

The Steelers’ training and medical staff appear to have known what they were doing with McDonald this year, however, in their approach to his recovery. Once he suffered (a still unspecified) foot injury, they pretty much shut him down until the regular season was gearing up.

He tried to practice at the start of week one, but couldn’t go full, and they shut him down, giving him another week. He was able to practice a week later, but the coaching staff limited his workload in his first game back.

Since then, he has been getting a lot of playing time and is on pace to record 60 catches for over 800 yards while working in a tandem at the tight end position with Jesse James (and even Xavier Grimble has been getting meaningful work).

What might have happened had either he or the training staff rushed McDonald back? We could be talking about another season plagued with injury, and I would be trying to write articles about how just because a player gets injured a lot doesn’t mean he deserves scorn.

Instead, we get to talk about him being an energy-bringer at a position that has never really brought much energy—even Heath Miller was more of a workmanlike, unexciting guy. Provided that he continues to stay healthy in the second half of the season, we will continue to see why the patience and the wait was worth it.