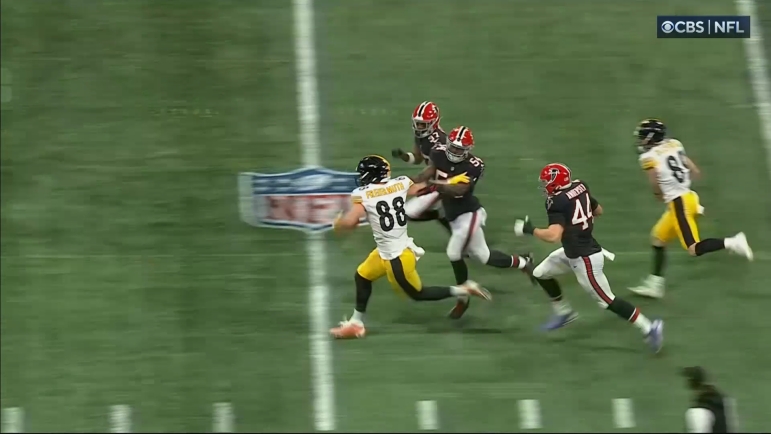 – The Pittsburgh Steelers put together their first winning streak of the season Sunday. 2003 remains the only season since the merger the team didn’t have a single such streak all season long.

– Pittsburgh did it by winning back-to-back road games on a short week, Monday night to Sunday. They hadn’t won two in a row on a short week since 2016 when they beat the Cleveland Browns on a Sunday and then knocked off the Indianapolis Colts the following Thursday.

– After running the ball 36 times against the Colts, the Steelers ran it 37 times versus the Falcons. It’s the first time they’ve run the ball 35+ times in consecutive games since 2017. The last time it happened before that was in 2007.

– While nine different Steelers caught a pass, zero of them were by the team’s slot receivers. In fact, Steelers’ wide receivers combined for just six catches for 62 yards in this game, five and 50 of them coming from Diontae Johnson.

Steven Sims and Gunner Olszewski had five carries for 21 yards and zero receptions for zero yards.

Two teams scored 19 points this weekend. Pittsburgh, who won, and Chicago, who lost. So a win-win for the Steelers who have the Bears’ original 2nd round pick.

– In their three wins since the bye, the Steelers have had more first downs rushing (35) than passing (29). In the last two games, they’ve had identical numbers. Eleven rushing first downs, 10 passing first downs.

– Kenny Pickett’s gone four straight games without an interception. No Steelers’ QB has done that since Ben Roethlisberger all the way back in 2013 from Weeks 11-14.

– Finally, Cameron Heyward now sits just 0.5 sacks behind T.J. Watt for 5th-most in team history. Watt has 73.5, Heyward has 73 after picking up a full-sack Sunday. Who will finish the year in 5th place?