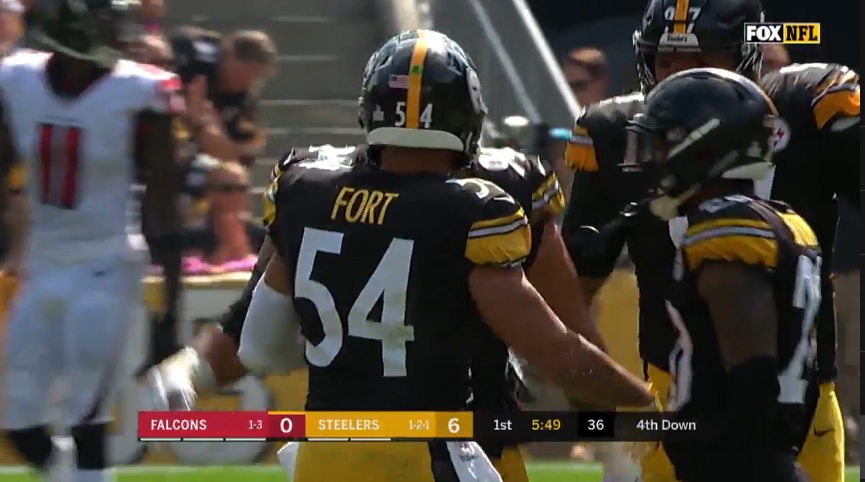 Man, oh man. What a game that was between the Pittsburgh Steelers and Atlanta Falcons Sunday afternoon at Heinz Field.

The Steelers picked up a much-needed 41-17 win at home, while the Falcons fell to 1-4. They’re a much better team than their record shows. Injuries suck.

Aside from an offensive explosion once again, the Steelers’ defense came through in a big way, as did the special teams.

Like I do each week, I’ll take a look at the top 5 plays from Sunday’s game that I felt helped turn the tide for the Steelers.

Holding a 6-0 lead after a lengthy drive by the offense, Pittsburgh turned to its defense, which took the field against a high profile, high-powered offense for Atlanta.

Surprisingly, the Steelers defense came through with a big stop, thanks to a well-timed blitz by LJ Fort – playing in place of the injured Vince Williams – that forced the Falcons to punt.

Atlanta moved the ball into Pittsburgh territory thanks to chunk-play passes from Matt Ryan to Austin Hooper for 14 yards, and Ryan to Calvin Ridley for 9 yards. But facing a 3rd and 6 from the Pittsburgh 38, the Falcons didn’t account for Fort coming free off left guard for the sack on Ryan.

Instead of taking the big hit on a clean run from Fort, Ryan wisely fell to the ground, taking his losses on the play. Fort’s sack forced a punt, giving the ball right back to Pittsburgh’s offense, which marched 97 yards in 11 plays to take a 13-0 lead.

We would've got outta the way too. 😳 pic.twitter.com/zLhWUgEGk2

This won’t go down in the book as an actual play, per se, but it was a key series of events on one snap that helped the Steelers keep their second drive of the game alive.

Facing a 3rd and 10 near midfield, Ben Roethlisberger chucked up an ill-advised throw down the middle of the field to Jesse James, who happened to be double covered on the play.

Fortunately for Roethlisberger and the Steelers, Damontae Kazee couldn’t come down with the diving interception, while Duke Riley was all over James, forcing the officials to throw a penalty flag on the play.

While the pass fell incomplete, the Steelers gained 38 yards on the heave and prayer, going from facing a potential punting situation near midfield to a prime scoring opportunity in the red zone.

Three plays after the defensive pass interference, Roethlisberger found JuJu Smith-Schuster down the seam for an 18-yard scoring strike, pushing the Steelers in front 13-0 late in the first quarter.

Trailing 13-7 midway through the second quarter, the Falcons were on the move, driving deep into Pittsburgh territory with hopes of taking the lead against the Steelers on the road.

On 1st and 10 from the Pittsburgh 14, Ryan dropped back to pass, but second-year outside linebacker TJ Watt came racing in off the right side for the sack and a loss of 9 yards, pushing the Falcons into a 2nd and long situation, while also finding themselves outside of the red zone after just one play inside it.

Two plays later Cam Heyward came up with another sack on Ryan, pushing the Falcons back even further, forcing the Falcons to settle for a 47-yard Matt Bryant field goal that made it a 13-10 game.

Who knows what happens on the drive if Watt doesn’t come through with the first-down sack. Maybe the Falcons still settle for the field goal, but with the way Atlanta moved the ball early in that drive, it’s like it would have ended up with another six points on the board.

As I said in the positional grades piece that I wrote postgame, I’ve been rather harsh on Jordan Berry this season. He shut me up in a big way on Sunday.

Holding a 34-17 lead with just under four minutes left in the game, the Steelers offense stalled, forcing a punt from Atlanta territory.

That’s where Berry came through in the clutch, dropping a perfect punt right near the goal line that Brian Allen downed at the 2 yard line, giving Atlanta the ball deep in its own end.

Three plays later Ryan fumbled the ball, and after a mad scramble near the goal line, Fort recovered the fumble in the end zone, capping off the 41-17 win.

I debated going with Roethlisberger’s atrocious end zone interception here, but Berry’s punt played a huge role in the Steelers’ defense coming up with a fumble and recovery for a touchdown late in the game. It was a perfect punt, and really put the Falcons in a bad spot. He did that all game long.

While Roethlisberger’s interception was as bad as it gets, it didn’t hurt the Steelers in the end. If Pittsburgh ended up losing this game, obviously I’m singing a different tune.

At this point in the game – late in the third quarter – it’s a 10-point game and the Steelers are about to get the ball back, likely on their side of the field.

Instead, Danny Smith draws up a great punt rush, and Roosevelt Nix comes through in the clutch, getting his big right paw on the ball for the blocked punt.

The block set the Steelers’ offense up at Atlanta’s 18 yard line, where Roethlisberger found James for 14 yards on first down, James Conner drew a personal foul on the next play, and then skirted around right end – with help from a great block by Nix – for his second touchdown of the game, quickly making it a 17-point game.

Nix’s block swung the tide of the game completely in Pittsburgh’s favor. It was the classic knockout blow.