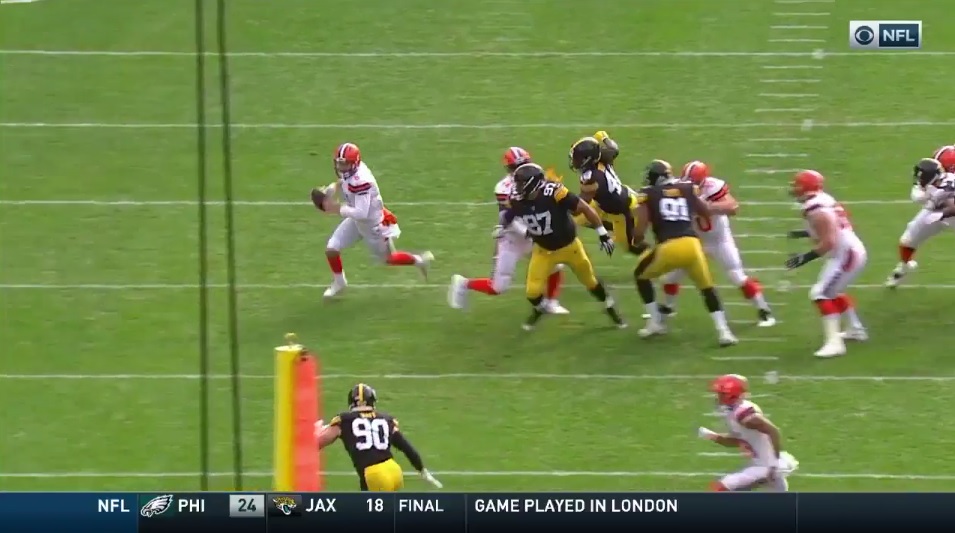 It’s easy to break down plays when things go right. Like we did this morning, looking at the Pittsburgh Steelers’ power run game, a well oiled machine that bullied the Cleveland Browns. Everyone does their job and you get the result you want, a big play, score, or conversion.

What happens when something goes wrong? That makes life a lot tougher and from our outsider view, harder to know what was supposed to happen.

Had a couple people ask me about going through this play, a perfect example of that. So a quick look of how perception and reality don’t always mesh.

We briefly broke this play down on Monday. A 3rd and 6 conversion, Baker Mayfield hitting Damion Ratley for a 21 yard completion that led to an opening drive field goal.

The over arching point of this play is clear. Bud Dupree generates pressure and this should’ve been a sack or at worst, a failed conversion, but the containment here is poor, Mayfield is able to break the pocket, extend the play, and hit Ratley.

The big question here? Who was supposed to contain this? Who is at fault for this breakdown? When I watched it, it looked like it’s on Heyward. He ends up working over Stephon Tuitt and seems to get sealed by the right tackle.

So I pointed that out again on Twitter yesterday. Turns out, I was wrong. And Heyward, very respectfully, broke the play down.

Nah. I was suppose get to center but tried read out of it late, to cover it up.

Heyward was covering up for Tuitt, who got caught penetrating, and tried to become the contain man. So because he was trying to plug that hole, it makes it look like he’s at fault here. He’s not. It’s on Tuitt.

You can see the same blitz scheme later in the game with the away side end having contain. The fact NFL Game Pass has its All-22 completely screwed up doesn’t help, sadly, so here’s a broadcast view of it. Tuitt contains while Tyson Alualu rushes over center. (Edit: Dave found the All-22 of it).

This time, Tuitt does his job and is rewarded with a sack (credit to the coverage too).

It’s a perfect example of how difficult it is – and I’ve told you guys this before – of knowing where to assign blame and things go wrong. Here, Heyward looked “wrong” because he was covering for a mistake elsewhere. And then we get to see it the “right” way later in the game and how good things look when well executed. A 3rd and 6 conversion vs a 3rd and 3 sack.