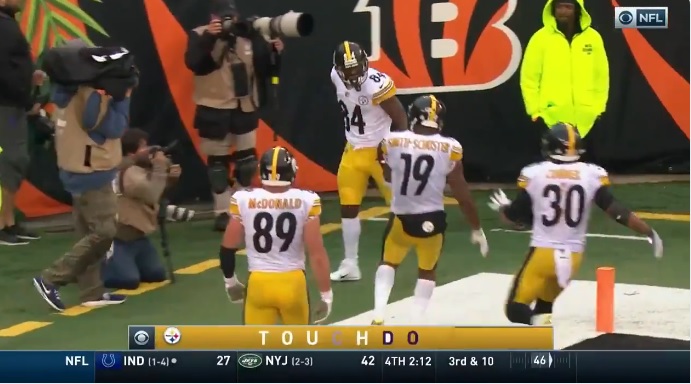 Walk it off, Antonio Brown.

His 31 yard touchdown with just ten seconds left was a play of beauty. Do you know how hard it is to get your best player so wide open when the entire defense is wanting to take him away?

That meant Randy Fichtner had to dial up something special. Not overly complicated, mind you, it doesn’t always have to be that way. But fast, effective, and honestly, pretty hard to defend. So let’s take a look at what made it so special.

It’s hard to see in the clips I’m going to show below but the Steelers initially line up 2×2 with Brown and Justin Hunter spread out to the bottom. That lets William Jackson roll up on AB at the line of scrimmage, likely denying a free and clean release.

To counter that, Brown motions into a stack set underneath Hunter, who saw action on the final drive, and forcing the cornerback to play off. Both cornerbacks can’t play at the line of scrimmage or they’re running the risk of getting picked by any slant/flat combination.

So Brown is free off the line.

He runs a slant underneath Hunter’s pick to the middle of the field. The Bengals are running Cover 0, an all-out pressure that sends anyone not covering into a blitz. There is no (hence “zero”) safety help over the top. One-on-one matchups, no one has any help.

That means the middle of the field is open, both linebackers mugging and then blitzing into the A gaps. Ben Roethlisberger is able to dump it off to Brown before the rush gets home and there’s literally no Bengal in position to make the play. No safety help and the corner is woefully trailing behind.

Look at it from the end zone angle. How close Vontaze Burfict is to getting to Roethlisberger. James Conner is in no man’s land, having to choose between both interior blitzers.

If Brown doesn’t get a clean release, if he isn’t stacked and gets jammed, bumped, whatever, this play is a bust. A sack, fumble, who knows what happens, with little time left and on the edge of field goal range.

“Yeah, they blitzed everybody. we had a great play call and really it was once I saw them starting to roll down into a zero, I knew what they were doing. I mean, if, if they weren’t, they’re disguising it, but it was catch the ball, deliver it and let the rest happen. And it’s one of those ones that you’re playing out in your mind and I knew they were going zero and it was in my head, this could be a touchdown.”

The biggest play of the year – so far – meant for the best playcall. And Randy Fichtner delivered.