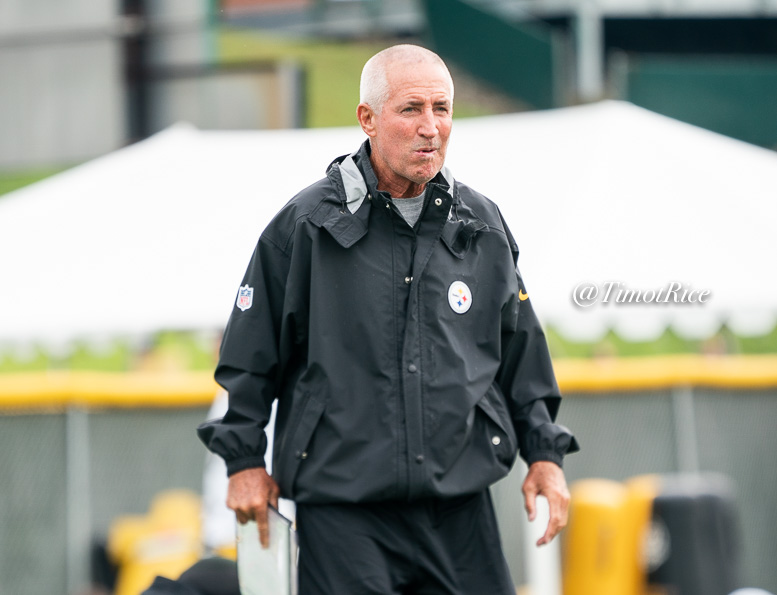 Look, you guys know I’m Danny Smith’s #1 fan. I have the tattoos to prove it. There’s no better part of camp than seeing Smith chomp gum and get after guys during the couple special teams sessions he’s granted each practice. Special teams is so much more than just making field goals, pinning punts, and running back kicks.

That’s all important but misses the process, the operation, of how those successes happen. And that’s one reason why he’s gotten a bad reputation to the casual fan. So much of what works is straight up missed by the fanbase. Which, to be fair, is easy to do since it’s hardly given any attention during the game unless it’s one of those black or white outcomes – success or failure.

I’m rambling here, I know, but only to try to put ignore the title I’ve written. It hurts my soul to say it. But we gotta be honest here.

Anyone else crying. Just me?

Sitting down in this week’s Coordinator’s Corner with Bob Labriola, Smith was asked to define what a “good” punt is, a hot topic given Jordan Berry’s struggles to begin the season. Smith replied, and it’s not the first time he’s said it, that a 40 yard net punt is the goal. Not just the goal, but gold standard.

“I go back to that 40 yard net,” Smith explained. “That’s the goal. That’s elite. That puts you in an upper class category. We had that this past week. It showed. We flipped the field against Baltimore.”

The latter part is true and Berry has improved. For the last two weeks, the net average has been above 40 yards. 41.6 against Tampa (though Desean Jackson nearly had a touchdown) and 40.4 versus Baltimore.

That statement would be correct if he made it ten years ago. And that’s my belief why he still holds that “40” in so high regard. Why?

It’s only been about a decade since 40 yard net punts were a thing.

As the position has become more specialized, more focused, just in the way kickers now blow the doors off past eras in field goal percentage, that “elite” standard needs to be updated. Gross averages have improved and so have coverage units.

From 1976 to 2006, according to Football Database, no one ever had a net punting average of 40 yards. The closest anyone ever came was in 1993, when New York Giants’ punter Mike Horan averaged 39.9 yards. So close, so far.

But that all changed in 2007. The first two ever in the “40 club” appeared. Andy Lee netted 41 yards on the nose while Shane Lechler edged him out at 41.1. From there, it’s taken off. I complied the list of net-40 punters since 2007 to examine the trend since it began.

That’s a pretty clear trend. Since 2012, there’s been double-digit punters netting that much and most years, it’s close to half the league. 2014 was the only weird exception.

Back in even 2010? Yeah, 40 yard net was uncommon. That made it elite when only a handful of punters were pulling it off. Today? It’s not elite. Quite literally, it’s average. Not terrible, mind you, there’s still plenty who average below, including Berry (we’ll get to that).

Smith’s been coaching special teams for a long time. He’s been doing this full-time since 2001 with Buffalo, then Washington, and now Pittsburgh. So when he started, and for the first six years of his career since the Bills, literally no one achieved that mark. Many came close but didn’t cross the threshold. So of course that would seem like an elite number. Even in those first couple years, it was the elite punters like Lee, Lechler, and Mat McBriar achieved that feat. So that’s how “40” became associated with elite.

The other factor to consider? In Smith’s entire career, he’s only had one punter net 40 yards in a season. That was Berry two years ago. So of course, if you’re going off personal experience, and only one guy has ever done it for you, that number gets cemented as elite.

Here’s the net averages for his punter since 2007, when 40 net became a thing.

First of all, woah, Smith has had a Rolodex of punters to deal with. But that’s besides the point, I know. The point is, to Smith, both in personal experience and overall league history, 40 yards is something special.

But it’s not. It’s the norm, the average. The idea it’s elite is antiquated. It’s like still thinking gas costs $1.25 or that a quarter and a good story could buy you a week’s worth of groceries.

Perhaps that’s one reason why Berry has gotten such a long leash (though I believe he’s not nearly been as bad as some make him out to be). When you’re judging him on that 40 yard mark, and he’s hovering around there, he looks pretty good. Compare to the rest of the league? Not so much.

So what is elite? That’s harder to say, more subjective for me to pin down. If we look at the numbers since 2012, when near half the league was reaching at least 40, 42 yards seems like a better number. Here’s how many punters achieved that year-by-year.

That feels more like percentage of the 40-netters from the early days before it became common place, the 2007-2011 era. I know that doesn’t seem like much but we’re talking about punting here. The margin between good and bad is razor thin. An extra two yards per net punt, over 80 punts per season, is 160 total yards. That’s more than 1.5 football fields of field position. Adds up, doesn’t it?

Again, a 40 yard net isn’t bad and for Berry, would be close to a career high. But elite? The goal? You know the saying. If you’re reaching your goals, they aren’t set high enough in the first place.

Time for Danny Smith to adjust.