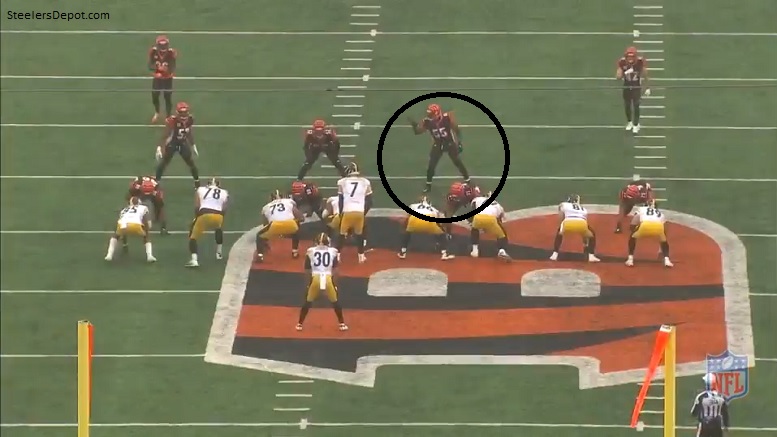 Prior to the Pittsburgh Steelers Sunday road game against the Cincinnati Bengals there were rumblings that linebacker Vontaze Burfict was planning to get some sort of payback against wide receiver JuJu Smith-Schuster for last season’s blindside block.

While Burfict didn’t seemingly get any cheap shots in on Smith-Schuster during Sunday’s game, he did manage to get one in on wide fellow Steelers wide receiver Antonio Brown in the third quarter. Additionally, Burfict then apparently threatened bodily harm on Smith Schuster immediately after knocking Brown out of the game temporarily, according to Steelers quarterback Ben Roethlisberger.

“And we got typical his antics,” Roethlisberger said of Burfict’s Sunday play during his weekly Tuesday interview on 93.7 The Fan. “I mean, when he hits A.B. and knocks A.B. and his guy out, that very next play, I mean, everyone knows A.B. leaves the game, he knows he knocked AB out, he’s standing there as I’m coming to the line of scrimmage, points to JuJu and says, ‘Your next.’

“I mean, to me, you’re threatening somebody. You know you just knocked somebody out and now you’re saying, ‘your next.’ To me, that’s completely uncalled for and that’s where I think I had the biggest issue is when you know you just knocked somebody out of a game and you know you hit him in the head, know that they left the field for a play and you point and say that you’re going to do that to someone else. Like, that’s over the line.”

While we’re unlikely to get any audio of Burfict threatening Smith-Schuster at the line of scrimmage just one play after he had temporarily knocked Brown out of the game with a right forearm to his head and neck area, the all-22 version of the tape shows the dirty linebacker pointing twice in the direction of the Steelers second-year wide receiver.

Sure, it’s hard to incriminate Burfict just for pointing at a player from another team, but when you match up those actions with what Roethlisberger said on Tuesday and what Smith-Schuster said on Monday, it’s sure hard to build up any sort of defense for the Bengals linebacker.

This seemingly annual case against Burfict for his actions against Steelers players during a game has now gone to the jury as the league is already reportedly looking at a few plays from Sunday’s game that included some questionable acts by him to determine if he’ll face any punishment. If the league only fines Burfict, that means he did something illegal and based on the player’s history, they’ll have a hard time explaining why he wasn’t suspended at least a few games.