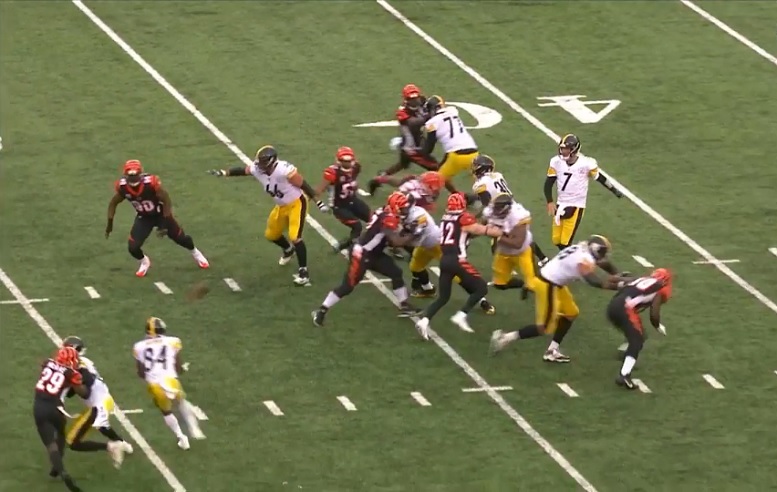 A Pittsburgh Steelers win over the Cincinnati Bengals or Baltimore Ravens just seems to always have some sort of controversy attached to it and such was the case Sunday afternoon. In the Steelers 28-21 road win over the Bengals the game-winning touchdown, a 31-yard pass from quarterback Ben Roethlisberger to wide receiver Antonio Brown with 10 seconds left in the fourth quarter, quickly had Cincinnati fans screaming that their team had beaten by a play that included an illegal pick by Pittsburgh wide receiver Justin Hunter not being called.

Not long after the game was over, the NFL’s Senior Vice President of Officiating, Al Riveron, released a short video on Twitter that included a replay of Brown’s touchdown in addition to an explanation in which he clarified that Hunter’s actions during the play were very much within the rules and thus not offensive pass interference.

“We watch in presnap. number 84 goes back in motion and when he does that, the defender comes up, slides outside as you just saw, and then immediately after the ball is snapped, he’s going to make contact and there is contact downfield as they both go downfield,” Riveron explains in the video. “However, the contact is initiated by the defender and therefore the receiver is not responsible for this contact. And the contact continues just when the ball is caught by 84, they’re still contact, but the contact is initiated by the defender, therefore this is not OPI.”

As you can see below, former NFL referee Terry McAulay, who now works for NBC Sports as a football rules analyst, took to Twitter to give his thoughts on the Steelers game-winning touchdown play and he noted how he believed Hunter’s actions as being illegal.

My thoughts on Pit/Cin TD: The defender is sliding over to cover AB and puts his hands up to protect himself from contact. The offensive player squares up and engages/blocks the defender. Contact clearly occurs more than a yard beyond the line. This should be a foul.

“The defender is sliding over to cover AB and puts his hands up to protect himself from contact. The offensive player squares up and engages/blocks the defender. Contact clearly occurs more than a yard beyond the line. This should be a foul,” McAulay tweeted.

McAulay’s thoughts aside, fellow NBC Sports analysts, Tony Dungy and Rodney Harrison, both said during halftime og the Sunday night game between the Kansas City Chiefs and New England Patriots that they believe Hunter did not perform an illegal pick during the Steelers game-winning touchdown

“As Al Riveron said, they’re never going to call this pick when it’s right on the defender on the line of scrimmage,” Dungy explained. “It looks like he’s just trying to get off. That will never get called.”

Harrison, who normally isn’t as objective when it comes to the Steelers and controversial plays, sided with Dungy.

“I thought it was a great no-call,” Harrison said after Dungy had given his explanation.

As you would probably imagine, Roethlisberger praised Hunter’s actions on that game-winning touchdown reception by Brown during his post-game press conference,.

“Justin Hunter was a guy there, that’s a huge play on his part by running up through there and clearing it out for him {Brown],” Roethlisberger said.