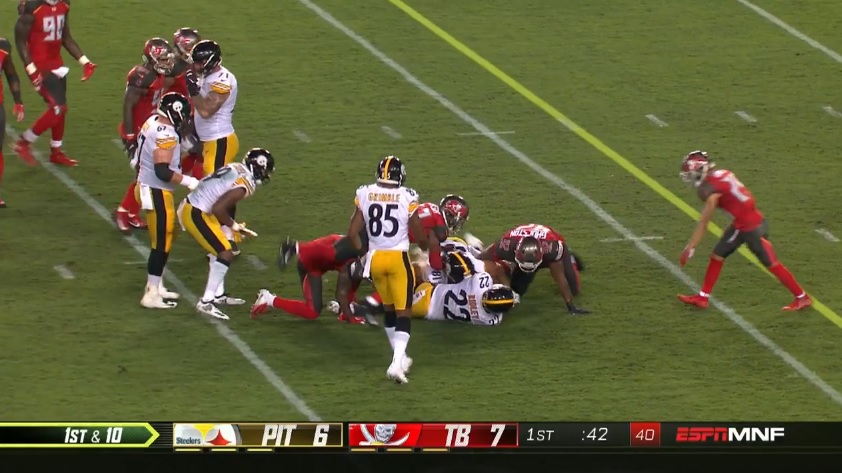 Stevan Ridley saw the field for only five snaps Monday Night. But it didn’t take long for him to impress offensive coordinator Randy Fichtner.

In fact, it took just one.

“I saw Rid the other night, he ran hard and pounded it up in there, got eight yards on his first carry,” Fichtner said. “You just felt like, ‘ok, he’s got a feel already.’ He just took that after the first run and said, ‘I’m ready to go.’ So those are always positives for you.”

By game’s end, Ridley carried the ball three times for 18 yards, netting gains of six, three, and nine yards (so Fichtner’s math was a little off). He ran hard, falling forward, and showed the fresh legs he’s supposed to have playing behind James Conner, who’s dominating the snap count.

Ridley is at least being somewhat involved in the offense now after Conner logged every snap by a running back in Week One against Cleveland. Something Fichtner admitted was a mistake during the week. He told Labriola the value of playing at least two backs.

“In one, you get an opportunity to keep one back fresh. Two, you’re going to have the ability to get your second back, who always has to be on call, just like a quarterback, he’s on call. A tweak here, a guy has to go re-tape an ankle, miss five plays, you have to be in. As opposed to getting in that critical situation in the game, you haven’t really played, you haven’t gotten into the flow of the game, that’s a little more to take on.”

In theory, it’d make sense for Ridley’s role to evolve over the course of the season. If we assume Le’Veon Bell doesn’t play a down for the Steelers this season, Conner is on pace for nearly 1100 snaps this season after playing just 68 snaps as a rookie. He’s also on pace for nearly 300 carries and 80 catches.

Logically, Ridley’s workload will slightly increase as the wear and tear begins to hit Conner, though given how he’s already been used and the way Bell has been used in the past, maybe not.