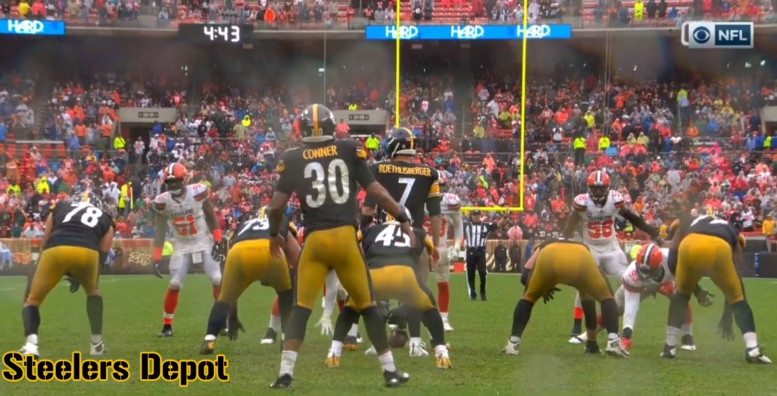 James Conner surprisingly took every single snap for the Pittsburgh Steelers running backs Sunday afternoon. In total, he played 92% of the time, a figure that rivals what Le’Veon Bell does.

Reflecting back though, Randy Fichtner admitted he made a mistake. According to this tweet from the PPG’s Gerry Dulac, Fichtner says he should’ve given Conner some rest.

OC Randy Fichtner on James Conner getting all the RB snaps vs Browns: "Thats on the young coordinator. I shoulda got the other running backs in there."

The only time Conner was off the field was when the Steelers used 4 WR sets, as our Matthew Marczi wrote about earlier Thursday.

Stevan Ridley played only four snaps, all on special teams, one of the “last three” on the kick return team. Jaylen Samuels didn’t see a single snap anywhere in his NFL debut.

Because of that, Conner shouldered a heavy workload on a rainy, run-first afternoon. He carried the ball 31 times while catching a career high five passes. Those 36 touches tie for the second most he’s had in a game. Ever. That counts high school, college, and pro.

I think he’s used to that,” Tomlin said of Conner being the “guy” on offense. “I think he gets better with use. I think that’s one of the things that’s attractive about him. I know, what was that, his sophomore year, when he scored all those touchdowns. He likes carrying the football. He warmed up to it.”

Despite that vote of confidence expect Ridley and/or Samuels to see their first action in the backfield this weekend.